One last look at LRO & LCROSS 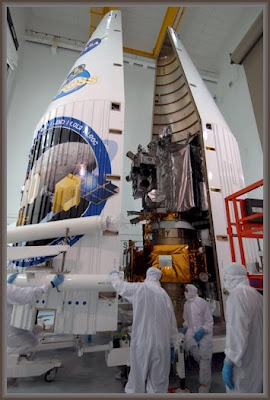 Mated: LRO stacked onto LCROSS, are sealed
away into the Atlas fairing as preparations
continue for their joint launch, now
scheduled no earlier the June 26
We expect to hear great things from NASA's Lunar Reconnaissance Orbiter (LRO) and it's sister payload, the Lunar CRater Observation and Sensing Satellite (LCROSS) over coming months. But until some enterprising Lunar Pioneer visits the sites and artifacts of past human activity on the Moon this is any will see of either spacecraft.

It is almost certainly the last time anyone will see either spacecraft intact.

"Seeing this in photos brought a strange sense of finality to the whole development. Years of effort, and now the team is done designing, done building, and nearly done testing."

"LRO is the silver-colored spacecraft, LCROSS the gold-colored spacecraft. Having never seen LRO, members of our flight team were stricken by how different the two spacecraft look. Both are covered in Multi-Layer Insulation (MLI for short) that protects the spacecraft from the harsh thermal environment of space. But the kinds of materials each spacecraft uses in their MLI are tailored to their respective missions - their orbits, how long they expect to dwell in the shadow of the moon, which sides of the spacecraft will face the sun, the sensitivity of some spacecraft elements to heat and cold, and the amount of heat specific electronics units produce."
Read the background HERE.
Posted by Joel Raupe at 10:44 PM