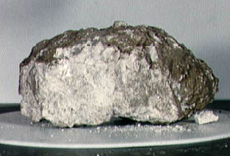 Sample of lunar anorthosite
collected during the Apollo Era

"The central peak of the Tycho Crater imaged by the terrain camera. Its peak is 2,480 meters from the crater floor. There is a layer of anorthosite in the subsurface of the central peak."

"KAGUYA's Multi-band Imager (MI) and Spectral Profiler (SP) investigate the distribution of minerals across the Moon by observing the reflected sunlight at the lunar surface. With these instruments, the KAGUYA team studied the mineral composition of a central peak in a crater on the lunar farside. It turned out to be predominantly anorthosite, whose major component is a calcium- and aluminum-rich mineral called plagioclase. Compared to the dark gray color of basalt, the major component of lunar maria, anorthosite is light in color, and is often seen in the lunar highlands."