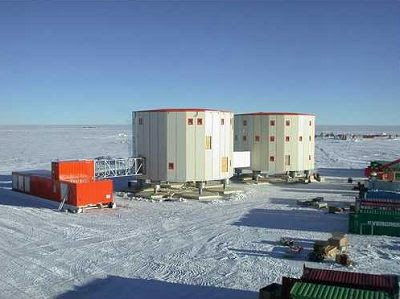 Based on the first compartment in ESA's MELISSA project, a black water recycling system is under construction for Concordia research base in Antarctica. The Concordia Station is a scientific base built in Antarctica by the French Polar Institute (IPEV) and the Italian Antarctic Programme (PNRA). Credit: IPEV
"Winter in Antarctica is harsh. Temperatures occasionally going as low as -84ºC, permanent darkness and isolation are only some of the conditions that crews at the Antarctic station Concordia have to brave. These challenging circumstances could help prepare for future human space exploration missions."

As the Summer Solstice peaked daylight length in the Northern Hemisphere, June 21, my thoughts turned to the deepest south, Antarctica, the subject of intense study continually since the International Geophysical Year fifty years ago. At one time, no human or animal life could be found there. The mean average population is now 5,000, military, science and ancillary personnel who have given us a large body of data on human adaptation made possible by high technology.

Even at 35 degrees north of the equator, the night passes quickly, from twilight's end to its beginning, barely 8 hours, and a never-setting Sun north of the Arctic Circle. In contrast, at Byrd Station, the Sun dipped below the horizon to stay weeks ago, and the twilight will precede dawn for half a month before it is seen again. To say life in Antarctica is one of extremes is an understatement. Mitigation of the disorienting effects on circadian rhythm have provided vital clues on how humans will eventually live with two week days and nights, or a Sun almost never sets at all, if Armstrong Station is ever built.

In short, life in Antarctica has become our first opportunity to understand what life will be like on the Moon, and on Mars. It's an easy bet if life were impossible to maintain on the continent of Antarctica, with no aboriginal human experience as guide, life on the Moon would be unthinkable. The same can be said of life in low Earth orbit, which on the launch of STS-127 Endeavour, hopefully on July 11, can safely be said for only 500 persons since 1961.

It may well be recorded one day that without our gathered experiences of living in Antarctica and for months in low Earth orbit, survival on the Moon would have been impossible. Looking even further down the road, we are likely to admit without similar experience adapting to life on the Moon, our trips beyond it would have been folly.

With these things in mind, ESA has just posted a brief feature on life and the French and Italian Concordia Station in Antarctica on the part of that agency's website devoted to Human Spaceflight and Exploration.

Ever look at the sky on a warm summer’s eve and wonder what lies beyond the captivating reds and oranges of the sunset? Or, do you ever lie beneath the twinkling stars on a clear night and wonder what it all means? Tomorrow is your chance to have all your questions answered. Neil deGrasse Tyson, world renowned astrophysicist, is doing a live taping of his interactive radio show, Star Talk, tomorrow at 8 PM on Chataboutit.com. Call into the show with your questions and be a part of the answers to the phenomenon of the summer sky.

Check out Neil on The Colbert Report and Jimmy Fallon