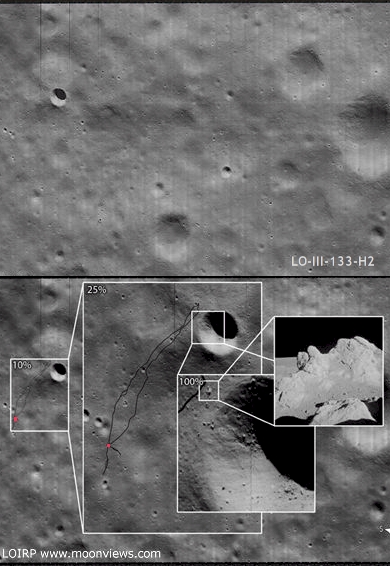 It's likely, had Shepherd and Mitchell had access to the detail hidden away in this image taken of their future landing site, taken four years before, they would not have missed Cone Crater.

"This photo (Frame 133-H2) of the future Apollo 14 landing site was taken by Lunar Orbiter III on 20 February 1967 at an orbital altitude of 46.7 km. The resolution of the image is around 0.8 meters per pixel. The area covered by this image is 4.52167 x 5.77666 km."
"Figure 1 shows the image unlabeled. In Figure 2 we have overlaid the EVA route upon this image so as to show where the crew set foot. While the crew were supposed to visit Cone crater they stopped 20 meters short of doing so due to some confusion as to their exact location. That said, they did visit some large rocks located adjacent to Cone crater's rim. The enlargement of this Lunar Orbiter image clearly shows some large rocks poised near the crater's rim. The inset photo shows the largest outcropping as photographed by the crew on the surface."