What Buzz Aldrin was doing in Hong Kong 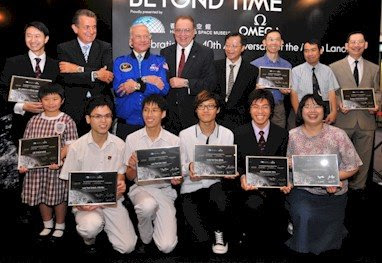 The Hong Kong Space Museum saw a massive surge in traffic this weekend as over 10,000 people visited the "Beyond Time" exhibition by the Museum and OMEGA during a three-day run that ended . "Beyond Time," held in celebration of the 40th anniversary of the Moon Landing, featured a collection of space travel equipment and memorabilia such as a space suit, cameras, flight plans, and a range of OMEGA Speedmaster watches, the only watch approved by NASA for manned space missions.

In the accompanying photograph, Aldrin proudly shows off a watch on both wrists, though some commented it was a new pose in practice for the former astronaut's new joint project with Rapper Snoop Doggy Dogg.

Miss Jenny , a six-year-old primary student who won the Science Fantasy Drawing category in the Hong Kong Youth Science Technology & Invention Competition 08-09, asked Aldrin, "If you could go to the moon again, who would you like to travel with, and why?" Aldrin responded that his choice would be his wife of more than 20 years, Lois, before adding, "But I think I would forfeit my seat to you, and I hope you would choose a very fine person to go with you."

Two secondary school students representing the 1990s, and , who won multiple local and international awards for their invention of the "miracle anti-bump lock", asked Mr. Aldrin what kind of difficulties he had walking on the Moon. Aldrin replied that stepping down from the ladder and getting back up was more difficult than he anticipated due to the distance between the last rung and the lunar surface. "I thought it would be easy, but it wasn't. It was hard, and I missed, and I had to try again. And I was so disappointed that I had not succeeded in the first thing I needed to do!"

, a scientist and Vice-Chairman of the Hong Kong Science Talent Society who was representing the 1980s, asked Mr. Ragan why NASA decided astronauts needed their own wristwatch and chronograph in space and on the Moon. Ragan, who led the chronograph testing for NASA, responded that NASA determined it was a "requirement for helping astronauts get to the Moon." He then added that after putting a range of off-the-shelf chronographs through a rigorous battery of tests, the OMEGA Speedmaster was the only one to pass, with the added benefit of needing no additional modifications.

Professor , a former NASA researcher who has also advised the Chinese space program and representing the 1940s, asked the final question, "Do you think that space exploration can one day help unite humankind?" Aldrin replied, "I think there is something special about space ... up there is great hope." He concluded that the leader of any nation embarking upon space exploration would be "very kindly remembered by history."

Following the launch event, the exhibition was immediately opened to the public, resulting in a steady flow of museum-goers and photographers for the remainder of the weekend.