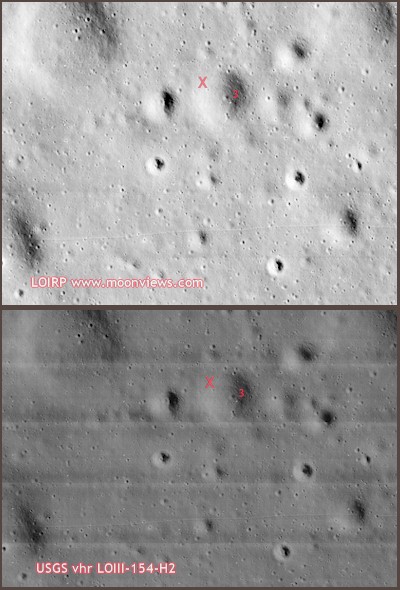 All in all, it's a fair comparison, though we encourage many more talented people to do the same thing, using many different methods. It's certainly not the best or the worst of the Lunar Orbiter images available before the resourceful and highly talented Certified Techno-Archaeologists of the Lunar Orbiter Image Restoration Project (LOIRP) solved the logistic and mechanical puzzle.

The subject seems to be just a continuation of more of the familiar ancient mare material contiguous to Oceanus Procellarum, strewn with secondary craters and debris from a wide range of impacts and craters representing as many lunar eras.

Actually, Lunar Orbiter III-154-H2 may be among the best available. On close examination, it's difficult to tell any big improvement after LOIRP got their hands on the original tapes, reverse engineered, restored and, in some cases, built from scratch equipment needed to read them.

Take a closer look, and you will see some big differences.

Obviously, there's the contrast and consistent balance in the 2009 image produced by LOIRP and released June 15, 2009, as in the way each swath is normalized, from edge to edge, seeming to nearly disappear.

There's a difference in scale, also. An optical illusion in width, produced by the ingenious imaging camera system, built to roll to make up for the spacecraft's swift movement overhead has been eliminated.

The amount of data in the collected original photograph was limited by the photographic medium, which wasn't a poor medium. Nevertheless, what the public saw were pictures of those pictures, glossy and with subtle detail lost in shadows small and large. What ended up in books was even more corrupted.

Today, the public (at least from United States missions) can download gigabyte-scale layers to home micro-super-computers and zoom in to boulders, limited only by the range and resolution of the imaging system itself.

Too bad the second frame (H2) produced by the spacecraft simultaneous to sequence frame 154 of Orbiter III's manned landing site survey was imaged in February 1967, and two months prior to the landing of Surveyor 3.

The white dot peg, and artifact of the original imaging system, is very close to the future location of Surveyor 3, inside the crater that composed the belly of the "snowman;" the feature Pete Conrad and Alan Bean were so delighted to see out their viewports when their Apollo 12 lunar module tipped forward during the final seconds of Terminal Descent in November 1969.

It was the second manned landing on the Moon, and this not only proved the success of Apollo 11 was no stroke of luck, but the U.S. could also land on target. The original image above played a huge role in that success.

In fact, there is a lot of Cold War, personal and science history in this otherwise ordinary-looking shot of apparently unremarkable lunar landscape. The folks at Moonviews have now added their own and very welcome contribution.
Posted by Joel Raupe at 7:05 PM

When will we able to see the actual evidence of the debris left on the moon from the Apollo missions? These are not tight enough shots and this would once and for all put all the doubters and theorists to bed. Thanks for your work!

Should not be long now, based on the preliminary resolution offered by the Lunar Reconnaissance Orbiter Camera now being calibrated by Arizona State, as the LRO orbits over the terminator. I would be surprised if a published improvement from LRO to the best image yet we have of the Apollo 11 landing site, clearly showing the surface disturbance made by the descent engine of the Eagle in July 1969.

Lunar Orbiter did resolve the Surveyor lander at Flamsteed, and the Apollo SM metrics camera on-board the J missions, Apollos 15, 16 & 17 definitively resolved those landing sites while surface operations were underway.

There are now 71 sites of human activity on the Moon. Resolving the manned landing sites is a priority, and well within the capability of LRO. While the LOIRP recovery of lost resolution from the Lunar Orbiter missions (1966-1968) is very impressive, they can't hold a candle even to the preliminary images taken by the LROC, which only arrived in lunar orbit two weeks ago. (See out later postings)