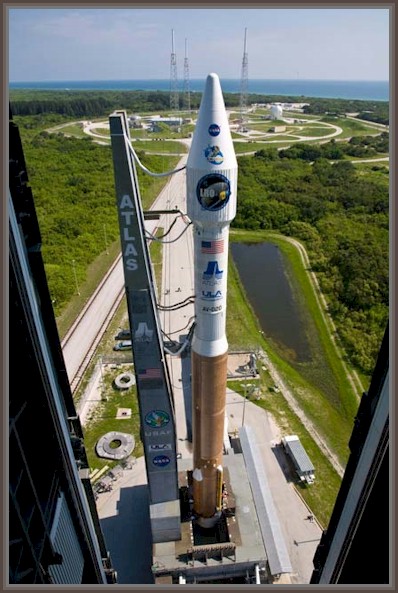 Even as Barack Obama's Human Spaceflight Review Committee held its first public hearing in Washington, Wednesday, the first true missions of his predecessor's Vision for Space Exploration were rolled out at Cape Canaveral.

Month's delayed, with many millions of miles ahead for each of these fourth generation Precursor mission recommended before any "extended human activity on the Moon," the Lunar Reconnaissance Orbiter (LRO) and Lunar CRater Observation and Remote Sensing Satellite (LCROSS) could be the beginning or the Grand Finale of a new era in lunar exploration.

It's an era that probably truly began with Japan's Kaguya lunar orbiter, a mission just ended.

Though some might say the era truly began with Clementine in 1994, though it might be more proper to give such a distinction to the humble Lunar Prospector, who's data are still yielding science ten years after it was plowed into the depths of a permanently darkened polar crater in 1999. The fanciful end to Prospector is the primary mission of LCROSS.

As much a breakthrough as Kaguya and India's Chandrayaan-1 remain, LRO and LCROSS stand a head taller, with the anticipation of millions riding with them to the Moon.

The first in a series of launch opportunities this week, narrowed to accommodate a hard fought battle to launch STS-127 that ended Wednesday morning, opens for the Atlas V carrying LRO-LCROSS to the Moon Thursday at 2112 UT.
Posted by Joel Raupe at 10:57 PM