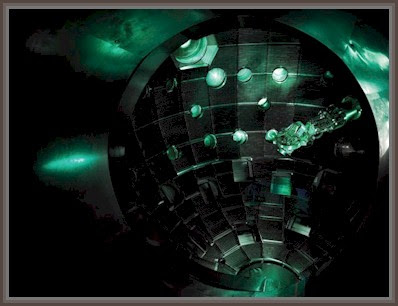 Ground zero: A circular access port affords a glimpse into a 10-meter-diameter target chamber where, in the coming months, powerful lasers will be fired with the goal of setting off small thermonuclear explosions.
(See more images.) Credit: Jason Madara

Researchers at a the National Ignition Facility (NIF) in California will soon attempt to start self-sustaining fusion reactions using the world's largest lasers. If it works, it could be a first step on the road to abundant fusion power.

It's late April and workers are assembling the last parts of the National Ignition Facility (NIF), a sprawling building covering the area of three football fields at Lawrence Livermore National Laboratory in Livermore, CA. Dressed in hard hats, hair nets, lab coats, and latex gloves, they have gathered at the target chamber, a sphere 10 meters in diameter and bristling with 48 burnished-aluminum ducts that together house 192 separate laser beams. Each beam on its own is one of the world's most powerful, says Bruno Van Wonterghem, operations manager at NIF. Together they deliver 50 to 60 times the energy of any other laser.

Read the Article HERE.
Posted by Joel Raupe at 2:21 PM