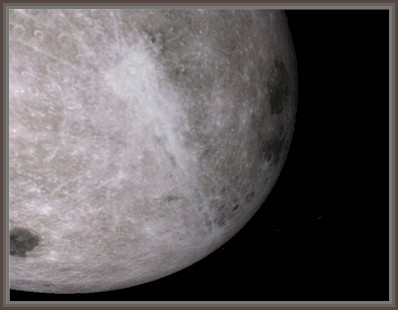 The Lunar Reconnaissance Orbiter will reach the Moon, later this morning, slowing into an orbit over the terminator, having been first grabbed by lunar gravity and swinging past a low point over the south pole. It will be near midnight on the Near Side and noon on the Far Side, and LRO will straddle the line between both.

LCROSS will begin an hour-long test beginning at approximately 1220 UT (5:20 am PDT at NASA Ames in California). This is scheduled to begin and hour and fifty minutes after the spacecraft reaches perilune at 10:30 UT (3:30 am PDT).

"The first 30 minutes will contain a view of the lunar surface from an altitude of approximately 9,000 km. The video feed is set to display one frame per second. During the latter 30 minutes, the spacecraft will perform multiple scans of the moon's horizon to calibrate its sensors. During this latter half hour, the video image will update only occasionally."

Graphic visualization of LCROSS and it's dance with the Moon can be followed HERE.
Posted by Joel Raupe at 1:54 AM

I actually enjoyed reading through this posting.Many thanks.
Calibration

Glad you enjoyed it. Those events were the beginning of an eventful two and half years following the LRO's record-breaking mission. You might enjoy the postings that followed, as well.