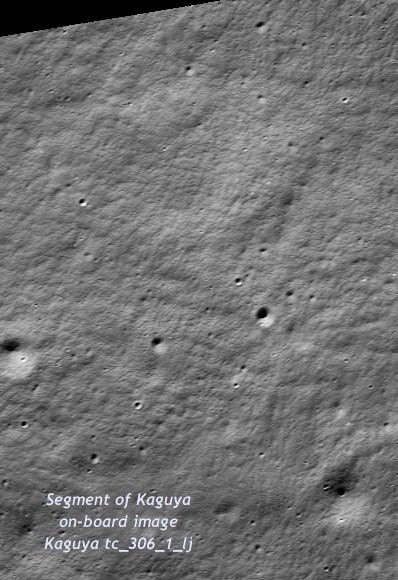 Junya Tarezono of JAXA forwards his congratulations, again, on the successful launch, Thursday, of LRO & LCROSS.

And he forward the following, about additional imagery JAXA released (again, on the Japanese language part of the beautiful Kaguya Image Gallery, though the new set of final images are composed from data compiled from the on-board Terrain Camera.
In yesterday's JAXA press release, reference was made only to data by NHK's HDTV, but not for Kaguya's Terrain Camera.

However, now you can see a magnificant view of the movies compiled from last shots taken by the TC. (HERE.)

Under "Hot Topic (HERE), and go to "JAXA Video" If you are YouTube lover, just go to:
http://www.youtube.com/watch?v=AxDNWXZpC3g

The movie was taken approximately 12 minutes before the impact. As the Kaguya's impact point was in the shadowed area and became dark, they could not obtain the image pairs to create a 3D movie.

One shot, centered at 73.5 S and 260.5 E around, and from an altitude of approximately 25 kilometers, the viewpoint is at first above 2300 meters from the lunar surface, and the viewpoint as Kaguya decends 400 meters in the last scene.
Press release can be found HERE.

Junya Terazono
(jtv@terakin.com)
Posted by Joel Raupe at 9:21 AM