Still heading north after it's encounter with the Moon almost a week ago, the Lunar CRater Remote Observation Sensing Satellite (LCROSS), together with it's Shepherding Satellite are in a polar orbit back around the Earth and south, to loop around back toward the north again out to the distance of the Moon.

On October 9 the Moon and LCROSS will try to occupy the same spot at the same time, and LCROSS, as expected, will be obliterated by the encounter. If all goes as planned its impact will take place within one of many craters around the Moon's South Pole with interiors permanently in shadow and perhaps sheltering ancient stores of ice , in one form or another.

The impact may even occur within the same crater Shoemaker Lunar Prospector was guided into at the end of its historic mission in 1999.

If LCROSS impact takes place there, or perhaps inside its neighbor Faustini, then a famous gap through the ancient Near Side rim of South Pole Aitken Basin, a gap between the Malapert and "Leibnitz Beta" known as "the Keyhole" might afford a barely favorable view from as far east as Texas.

Final targer selection is not expected before the latter part of September, NASA Ames says, however, that the LCROSS impact is expected to happen within 30 minutes of 1130 UT (7:30 am) on October 9. 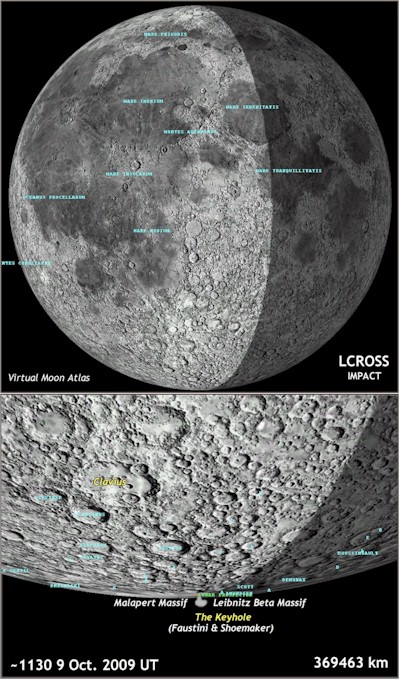