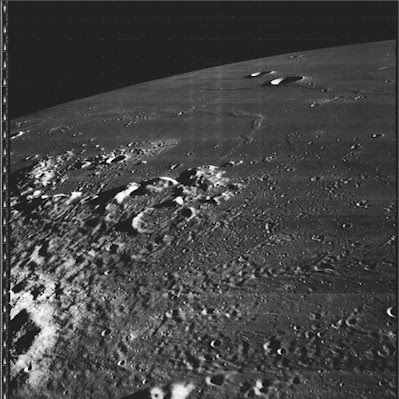 More new high-resolution images have been recovered and released by the Lunar Orbiter Image Restoration Project (LOIRP), restored from repeated sweeps of data transmitted to Earth originally from Lunar Orbiter III in Feb. 1967.

Even at a comparatively high altitude this capture of Planitia Descendus (the low hills and ancient craters on the peninsula at the near center along the western Oceanus Procellarum) rivals many returned from Japan's Kaguya.
Somewhere in this image is the landing site of Luna 9, the first successfully soft-landed vehicle on the Moon, sent by the Soviet Union and arriving the same month a year earlier, on February 3, 1966.
Luna 9's landing site is somewhat disputed because images returned from the lander show a flat region with what may be hills some distance away though official coordinates (296.0° E, 7.0°N) put the egg-shaped 82 kg lander right in the middle of the rough terrain of those same mountains of Descendus (or "the plain of descent," in honor of the Soviet achievement).
Looks can be deceiving though, but there's obviously not much flatland at that location. So where is Luna 9? There have been many excellent, educated speculations over the years. Forty-three years later, perhaps the Lunar Reconnaissance Orbiter (LRO) can finally solve this mystery.

Just this side of the largest distinct crater on the flat plain of the Sea of Storms, at the top of this image (west of Reiner Gamma, out of view) is the resting place of Luna 8, which may have landed successfully Dec. 7, 1965, though all contact with the earlier Soviet probe was lost at or near landing.

The United States successfully landed Surveyor 1 on June 2, 1966, 700 kilometers to the southeast, inside the half buried rim of Flamsteed but still well inside the vast plain of Procellarum beyond that small part seen here.