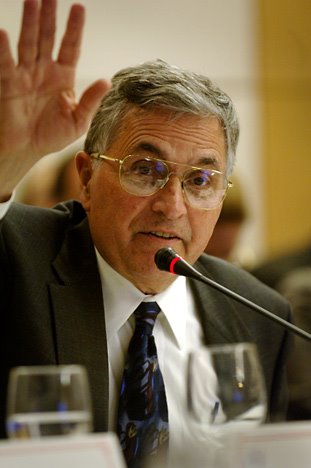 Dr. Harrison H. "Jack" Schmitt, the only full scientist to visit the Moon on the last Apollo mission in 1972, takes on a popular peer, Dr. Machio Kaku over the importance of the Moon to future space exploration activities by the United States.
He's no stranger to controversy, though he has studiously avoided them throughout what has been, to say the very least, an "extraordinary" career as a geologist.

Dr. Harrison H. "Jack" Schmitt, lunar module pilot for the Apollo 17 mission, was an exacting scientist before and long after after he took any geologist's "dream field expedition." In December 1972, with Gene Cernan he explored the Taurus-Littrow valley and came back with stunning samples from a crossroads of lunar morphology.

He stayed on with NASA after what would be the last visit to the lunar surface, at the Apollo sample receiving lab, and continued to derive results and publish, usually posing many more new questions raised from the sample studies rather than rush to conclusions much beyond what the evidence suggested. Instead, he constrained the range of possibilities.

In a field with many excellent planetary scientists, including many with equally distinguished records that show as deep an awareness of our improving, but far from complete, understanding of Earth's Moon, Jack Schmitt could claim preeminence, but does not. In his writings, he constantly shows a respect for conclusions raised by colleagues, and when he disagrees, he's nearly always gentle, recognizing the limitations of people and empiricism, channeled continually toward progress rather than perfection.

It is a time when greater government funding than ever before, together with the old dictum requiring scientists to "publish or perish," and public relations sometimes seems to have triumphed over the necessarily slow progress yielded by the Scientific Method. Lacking much credibility of their own, politicians cling to science to stay afloat. Few would scientists would understand that better than former U. S. Senator Harrison Schmitt, as well. This hasn't stopped him from continuing to insist that "consensus," however it may be understood in political circles, is the best or the only way science gets closer to the truth.
For example, Dr. Schmitt is among a minority not yet completely sold on the prevailing "Mar-sized object" impact theory of the origin to both Earth and Moon. Though he doesn't dismiss the possibility, he does not dismiss evidence that points elsewhere, such as the persistence of angular momentum of a type, in the present motion of Earth and Moon, that still shows evidence for the capture theory.
More publicly, in November 2008 Dr. Schmitt parted ways with The Planetary Society over an adopted resolution supporting a faster track to Mars, bypassing the Moon, and more importantly because the adopted platform advocated increased funding based on a political, rather than a scientific, "consensus" about anthropomorphic global warming (AGW).
"As a geologist, I love Earth observations," he wrote. "But, it is ridiculous to tie this objective to a "consensus" that humans are causing global warming when human experience, geologic data and history, and current cooling can argue otherwise.

"'Consensus,' as many have said, merely represents the absence of definitive science."

On June 23 Michio Maku, the popularizer of cosmology, wrote a column in the Wall Street Journal called, "The New Race to the Moon."

In a letter on June 29 to the Journal Schmitt responded, writing, "Michio Kaku provides a clear summary of the apparent international interest in following Americans to the Moon ("The New Race for the Moon," op-ed, June 23). However, he seems strangely uninformed about the moon's strategic and economic values. Strategically, simply imagine the future of the U.S. and liberty if a totalitarian society becomes the dominant space-faring nation of the Earth. To that society would accrue all the technical, political and prestige value that once came to us as a result of the Apollo 11 landing on the moon 40 years ago this July 20."

"Economically, the moon does have "air and water," contrary to Mr. Kaku's assertion. Heating the lunar soil will release abundant hydrogen, helium, carbon and nitrogen (all implanted by the solar wind). In that heating process, hydrogen also reacts with lunar minerals to produce water from which oxygen can be derived. All of these resources obviously have economic value for other activities on the moon and in space."

The complete text of Dr. Schmitt's letter to the Wall Street Journal, "To Infinity and Beyond, or at least Back to the Moon," can be read HERE.