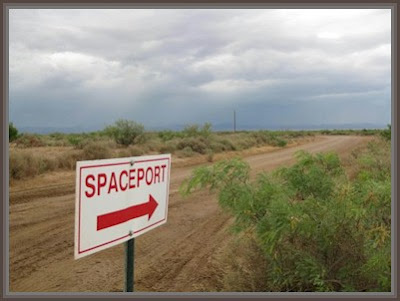 In this AP photo taken in May, a forlorn sign shows the way to the site of New Mexico's planned spaceport, near Upham, N.M. A groundbreaking ceremony is planned for Friday, June 19 to mark the start of construction on a terminal, hangar and a 3048-meter runway. (AP Photo/Tim Korte)

The wide-open desert of southern New Mexico has long been a key passageway: Spanish conquistadors used it to settle North America, and wagon trains and railroads rattled through on their way to California.

Today, New Mexico is hoping the forgotten stretch of cattle ranches and mountain ranges will become a gateway to space.

Gov. Bill Richardson and others are preparing to break ground Friday on construction of a terminal and hangar facility at the world's first commercial spaceport built with the idea of launching private citizens into space for profit. Some 250 people are lining up to pay $200,000 each to take the trip as early as next year.

It's called Spaceport America, a $200 million taxpayer-funded project where the sky is not the limit. From the 10,000-foot runway, spacecraft will take flight attached to an airplane, then break free and rocket 62 miles into space before returning to the facility. The flights will last about two hours and include five minutes of weightlessness.

Science fiction? Not by any stretch.