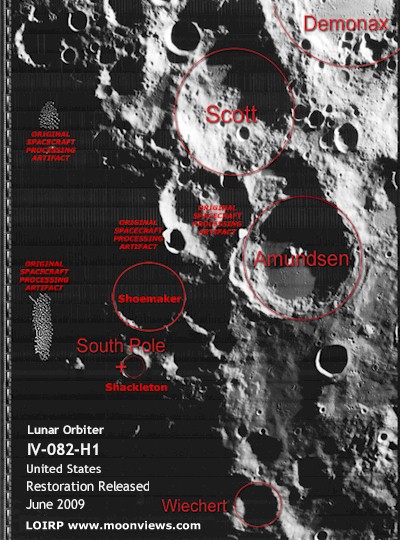 "This image was taken by Lunar Orbiter IV in May 1967 and shows the south pole of the Moon," reported Keith Cowling, over the weekend.

Between 1967 and NASA/DOD Clementine mission in 1994 this huge photograph represented the height of our knowledge of the lunar South Pole. Japan's recently ended Kaguya orbiter took man's first glance into the permanently dark and deep Shackleton crater that hugs the Moon's axis, just last summer.

"Adjacent to the south pole is Shoemaker crater named in honor of famed planetary geologist Eugene Shoemaker," writes Cowling. "The Lunar CRater Observation and Sensing Satellite (LCROSS) will be targeted to impact at the south pole of the moon. As such, the moon's polar regions are of great interest right now."

Almost too modest, if you ask me. The restorations underway at LOIRP in Colorado have given new life to an old mission, pulling sub-meter-sized relief from many images, showing boulders and craterlets that went undetected after their original release, in anticipation of Apollo.

For details on seeing the worthwhile full-sized images from LOIRP, visit HERE.
Posted by Joel Raupe at 12:13 AM

Indeed. The Secretary has the weak off. (LOL).

Seriously, I could use a secretary. All our interns are victims of the prevailing Prussian compulsory school system, and, like me, learned to "sight see" instead of spell.

Thanks for the correction.