The Legacy of Kaguya 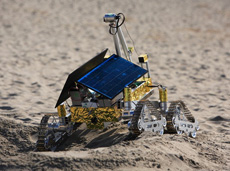 This last week brought an end to the Kaguya (SELENE-1) lunar orbiter, de-orbited near Gill crater, on the far southeastern limb, just barely on the Near Side of the Moon. Throughout the mission we've been privileged to receive occasional updates from Junya Terazono, on JAXA Kaguya science team.
Before the pending joint launch of NASA's Lunar Reconnaissance Orbiter (LRO) & Lunar CRater Remote Sensing Satellite (LCROSS), as early as next Wednesday, June 17, we thought, by way of saying thank you to Junya, now would be a good time to bring to your attention some spectacular summaries of the accomplishments (so far) of Japan's lunar science team and the impressive Kaguya lunar orbiter.

Therefore, the next several stories are taken from directly from JAXA's own summaries, only recently translated into English. Just as scientists are still analyzing data and obtaining new discoveries from Lunar Prospector (1998-1999) and even the lunar Orbiter series (1966-1968), we expect to continue to hear news from Kaguya, as their wider collection of data becomes available.

As to Kaguya, herself, we can hardly top Junya, who wrote:

"The princess went to the moon,
and our adventure continues."
Posted by Joel Raupe at 10:02 PM