We have been asked why we have yet to post anything about the public panel presentations, during the first meeting, last week, of President Obama's Human Space Flight Review Committee, aka, Augustine Commission II, in honor of its chairman Norm Augustine, who chaired a more long term look at human spaceflight in late 1990.

The reason is simple. We knew Jeff Foust of Space Politics and the Space Review was in attendance. 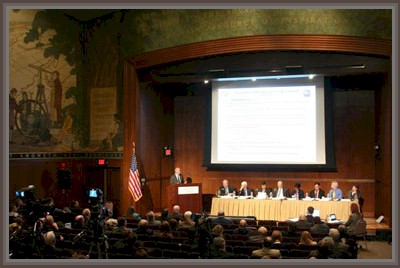 The Review of US Human Space Flight Plans Committee
held their first public meeting in Washington last week.
- The Space Review
Although he kept Twitter Followers informed of events at the meeting as they happened, we knew Jeff Foust was there for a reason. He was bound to write it up, in this case, for the essential Space Review, the online publication s a "periscope into reality," with its latest series of excellent articles coming out every Monday.

The Space Review - June 22 : "The existence of the Augustine committee (officially the Review of US Human Space Flight Plans Committee) has been widely interpreted to be a vote of no confidence in NASA’s current human spaceflight plans, in particular Constellation, by the White House. After all, if everything was going well—or at least perceived to be going well by the new administration—there would be little need for an independent review. The existence of the committee has provided a new opening for those who want to replace the current architecture with any number of alternatives."

"The committee’s first meeting, held last Wednesday at the Carnegie Institute for Science in Washington, DC, appeared to confirm those beliefs. Much of the eight-hour hearing was devoted to examining Constellation and well as several alternative systems that could be ready sooner and/or with less money than the incumbent. And while the committee dropped no hints about what direction it might be leaning, the hearing certainly triggered discussion within and outside the meeting that will last all summer, if not beyond."

The Committee Website
Posted by Joel Raupe at 10:54 PM