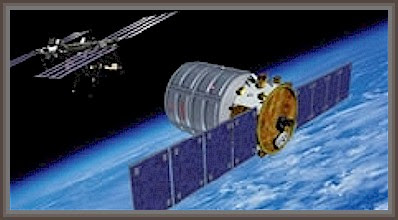 Thales announced on Wednesday that Orbital has contracted with Thales Alenia in a $250 million deal to design and build the pressurized modules for Orbital's own ATV, Cygnus.

"The contract foresees the first unit delivery in December 2010," Thales announced. "The Pressurized Cargo Modules will be designed and developed for Orbital’s CRS (Commercial Resupply Services) contract with NASA."

"Cygnus first flight is planned for the spring of 2011."

"The maneuvering spacecraft will consist of Orbital’s Service Module with which the PCM, will be integrated. The PCMs to be developed by Thales Alenia Space has experience acquired from previous ISS-related programs, such as the Multi-Purpose Logistics Module Leonardo built on behalf of the Italian Space Agency and NASA, and the ATV Jules Verne produced by Thales Alenia Space for ESA."

The COTS demonstration mission is scheduled to take place in the fourth quarter of 2010.

"With the award of the Commercial Resupply Service," said Orbital, "NASA has selected Orbital to provide 8 pressurized cargo missions beginning in the latter half of 2011

(Which seems to beg the question whether Thales is building the Japanese ATV, as well, and whether they've played any role in announced improvements in Russia's standard Progress ATV's.)

"Orbital will carry out design, manufacturing and test of the new Taurus II launch vehicle in Dulles, Virginia and Chandler, Arizona.

"The company’s development, production and integration of its Cygnus spacecraft and cargo modules will be done in Dulles and Wallops Island.

"The Taurus II launch vehicle will have a payload capacity of 4,750 to 6,250 Kg to low-Earth orbits (depending on altitude and inclination). The Cygnus spacecraft will be capable of delivering up to 2,700 Kg of pressurized or unpressurized cargo to the ISS, and will be capable of returning up to 1,200 Kg of cargo from ISS to Earth."

Of the twenty CRS ISS resupply missions NASA awarded nine to Orbital and eleven to SpaceX of California, now testing engines for their Falcon 9 vehicle already deployed at Cape Canaveral."
Posted by Joel Raupe at 1:40 PM