While awaiting the English language version of JAXA's official press release, the Japanese press release, including the Terrain Camera image below of the landing site has been brought to our attention by Junya Terazono.

The summary of the press release:

* location: 65.5S, 80.4E, near Gill crater.
* [Fig.1] orbit information till the impact. The background is a topographic
map by Laser Altimeter (LALT) of Kaguya.
* [Fig.2] TC image (acquired in past days) of the impact site. The star
denotes the impact site.
* [Fig.3] Topographic map near the impact site by LALT.
* [Fig.4] Photograph of the Kaguya operation room at the moment of the impact.

Please wait for the official information until the English version of press release is issued by JAXA. Please check the site often: http://www.jaxa.jp/index_e.html
The princess went to the moon,
and our adventure continues. 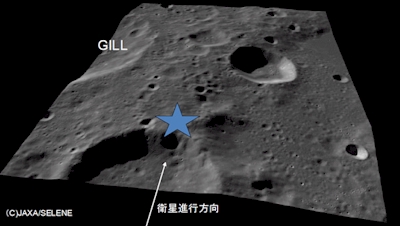 IMPACT: As viewed from AAT, the Anglo-Australian
Telescope, A very momentary flash signals the successful
planned impact and end of Kaguya. The highland area still in
sunlight behind the approaching terminator separates Heimholtz
from the Gill crater group beyond.
Click on Image to enlarge.
"The impact of Kaguya on the Moon was successfully observed with IRIS2 on the Anglo-Australian Telescope. A bright impact flash was seen close to the predicted time. The attached image shows four frames around the impact time with the bright flash in the second frame, and also faintly visible in the third and fourth. The observations used a 2.3 micron narrow band filter, and are part of a time series of 1 second exposures with 0.6 seconds dead time between each frame." Observers: Jeremy Bailey and Steve Lee 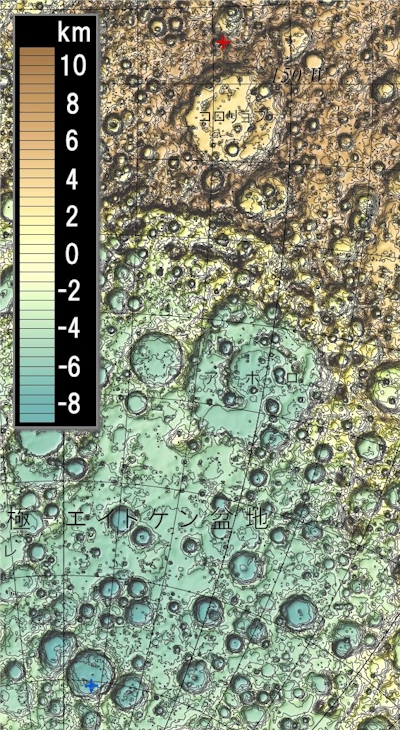 Cross-section of the largest discontinuity of the lunar exterior, stretching from north of the equator on the Far Side of the Moon to beyond the South Pole and familiar southern mountains on the Near Side that make up part of the ragged rim of 4 billion-year-old South Pole-Aitken Basin.

Red cross, above Right marks the highest altitude on the Moon near Englehardt; Blue Cross lower left designates its lowest altitude, in the southern interior of Antoniadi Basin.
The full range of departures from mean lunar elevation, and forever invisible from Earth near the central meridian of the Moon's far side, Japan's Kaguya orbiter confirmed the Moon as a world of extremes.
In this section from JAXA's third refinement (available in Japanese) of Kaguya LAT topography map are both the Moon's highest (Red Cross) and lowest (Blue Cross) elevations, only 2,400 kilometers (1,491 miles) apart.
At bottom left, just featured in what may be the last HD video shot taken from a mere 11 km overhead mere days before its expected impact.
At bottom left within Antoniade, one of more than 30 mare-filled micro-basins in the craggy interior of the 4 billion-year-old, 2000 kilometer-wide South Pole-Aitken (SPA) Basin. Antoniade's southern basin floor is the "Mariana Trench of the Moon," at least 8,100 meters below lunar mean. At top right, Kaguya is credited with isolating the "Mount Everest of the Moon," a mountain at least 16 kilometers higher than Antoniade., among the huge mountains to the north of Korolev and contiguous with the northeastern rim of the crater Englehardt.
JAXA investigators have come the closest so far in best determining the true tortured shape and complex mass and gravity of the Moon, and its elusive center using its laser altimeter and data from twin sub-satelites.
Scientists are anxious to sample the deep interiors of SBA Basin, still largely unexplored with no samples found from more remote areas and a mineral composition and which are relatively rare on the far side yet common on the near; metallic oxides and thorium as well as others common to the Moon's near side but rare on the hemisphere beyond view of the Earth.

"Kaguya, Japan's lunar orbiter, has concluded its mission with a concussion. The mission, which created a new set of gravity maps and also mapped the surface in HDTV, was scheduled to crash at 3:25 am local time in Japan, or 2:25 pm Eastern Daylight Time today in the US. Telescopes across Asia and Australia peered into night-time skies for a glimpse of the impact. The expected site, at 80 degrees east longitude and 66 degrees south in latitude, is shown here, as mapped by the European Space Agency's SMART-1 satellite, which itself fell to its end in 2006."

"But Kaguya's crash heralds a much bigger one yet to come -- one that may turn up water along with dust. On Thursday, NASA is set to launch Lunar Reconnaissance Orbiter along with its sister mission, LCROSS. In the autumn, that mission will send a 2,300 impactor -- an empty rocket stage -- into the shadowed parts of craters near the south pole where some scientists suspect ice may persist."
Posted by Joel Raupe at 5:27 PM