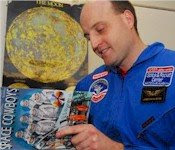 If Jim Schliefke ever had the chance to go to space, he'd jump at the chance. "Definitely," he said this week, affirming the declaration with a nod.

It was a courageous statement coming from someone who, just the week before, had crash-landed the space shuttle in water.

But then, it was only his first landing, clarified the nine-year Horace Mann Middle School science teacher as he sat in his classroom recalling the incident - and nobody was hurt.

It was all part of a simulation, with Schliefke cast as space shuttle pilot, at the Space Academy for Educators, a program offered at Space Camp.

The Franklin resident was among 16 educators from around the globe who spent a week in astronaut-style training, and discovering new ways to inspire their students.

Schliefke attended the program on a scholarship from Honeywell - one of 288 teachers from 16 countries and 47 states selected from among 1,200 applicants to take part in the Honeywell Educators @ Space Academy programs at the U.S. Space & Rocket Center in Huntsville, Ala. over the course of the summer.
Read the Feature HERE.
Posted by Joel Raupe at 12:05 AM