IBEX detects neutral H from the Sun bouncing off the Moon 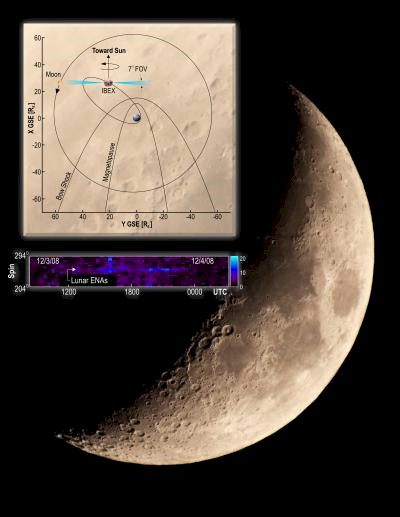 NASA's Interstellar Boundary Explorer (IBEX) has made the first detection of neutral atoms coming from the Moon (background image). The color-coded data toward the bottom shows the neutral particles and geometry measured at the Moon on Dec. 3, 2008. IBEX spins at four rotations per minute with its field of view sweeping over the moon each spin over about 10 hours. The neutral atoms are summed in 6 degree bins with the lunar direction indicated by the white arrow. IBEX detects particles produced by reflection and neutralization of the incident solar wind protons at toward the spacecraft. The Earth, moon and spacecraft shown toward the top are not to scale (Southwest Research Institute).

Until very recently it was believed the Solar Wind consisted solely of protons, whisking away from the Sun at various densities and speeds, the byproducts of hydrogen being fused into helium at millions of degrees at the heart of the all energy our modest home star eventually produces. It came as quite a surprise when neutral hydrogen was detected coming from that direction. After all. The Sun is a fusion reactor, one that wastes little of its hydrogen fuel, the most abundant and lightest of the elements, in this universe, anyway.

Now comes word from the Southwest Research Institute of this same hydrogen being detected, from quite a distance, reflecting off the Moon.

Southwest Research Institute: NASA's Interstellar Boundary Explorer (IBEX) has made the first observations of very fast hydrogen atoms coming from the moon, following decades of speculation and searching for their existence.

During spacecraft commissioning, the IBEX team turned on the IBEX-Hi instrument, built primarily by Southwest Research Institute (SwRI) and the Los Alamos National Laboratory, which measures atoms with speeds from about half a million to 2.5 million miles per hour. Its companion sensor, IBEX-Lo, built by Lockheed Martin, the University of New Hampshire, NASA Goddard Space Flight Center, and the University of Bern in Switzerland, measures atoms with speeds from about one hundred thousand to 1.5 million mph.

"Just after we got IBEX-Hi turned on, the moon happened to pass right through its field of view, and there they were," sais David J. McComas, IBEX principal investigator and assistant vice president of the SwRI Space Science and Engineering Division. "The instrument lit up with a clear signal of the neutral atoms being detected as they backscattered from the moon."

The solar wind, the supersonic stream of charged particles that flows out from the sun, moves out into space in every direction at speeds of about a million mph. The Earth's strong magnetic field shields our planet from the solar wind. The moon has no such protection, causing solar wind to slam onto the moon's sunward side.

From its vantage point in space, IBEX sees about half of the moon -- one quarter of it is dark and faces away from the sun, while the other quarter faces the sun. Solar wind particles impact only the dayside, where most of them are embedded in the lunar surface, though some scatter off in different directions.

The scattered ones become neutral atoms in this process by picking up electrons from the lunar surface.

The IBEX team estimates that only about 10 percent of these solar wind ions reflect off the moon as neutral atoms while 90 percent are embedded in the lunar surface. The nature of the lunar surface the wind encounters determs the percentage embedded, percentage of neutral particles reflected and their direction of travel.

McComas said these findings also shed light on the recycling process undertaken by particles throughout the solar system, and beyond.

The solar wind and other charged particles impact dust and larger objects as they travel through space, where they backscatter and are reprocessed as neutral atoms. These atoms can travel long distances before they are stripped of electrons and become ions.

The combined scattering and neutralization process observed at the moon have implications for interactions with objects across the solar system, such as asteroids, Kuiper Belt objects (KBOs) and other moons.

The plasma-surface interactions occurring within protostellar nebula, the region that forms around planets and stars -- as well as exoplanets -- also can be inferred.

IBEX's primary mission is to observe and map the complex interactions occurring at the edge of the solar system, where solar wind runs up against interstellar material. The spacecraft carries the most sensitive neutral atom detectors ever flown, enabling researchers to measure particle energy and make precise images of where they originate.

Later this summer, the IBEX team will release its first All-Sky map, showing the energetic processes occurring at the edge of the Solar System.

Though he would not comment until the image is complete, McComas says "it doesn't look like any of the models."
Posted by Joel Raupe at 10:15 AM