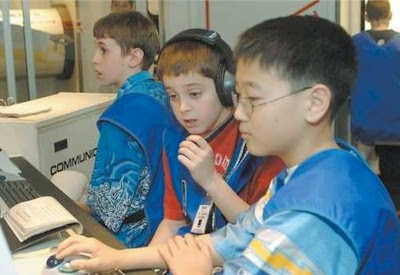 Students participate in a mission at one of the 46 Challenger Learning Centers worldwide. The Centre County YMCA has received approval or a center that puts fourth-through eighth-graders in command of simulated space missions.

Bellefont PA— Teams of elementary students could be stepping into astronauts’ shoes — commanding mock space missions, while learning about science and teamwork — if the Centre County YMCA’s plans come together.

The YMCA learned in May that it had received approval from Challenger Center for Space Science Education to run a learning center. The center will put fourth-through eighth-graders in command of simulated space missions — giving them hands-on learning experiences as members of the flying and commanding teams.

Challenger Center is a nonprofit organization based in Alexandria, Va., that family members of astronauts who died in the Challenger Space Shuttle in 1986 started.

There are 46 Challenger Learning Centers, including 43 in the United States. The YMCA site would become the first one anywhere to be run by a Y.
Read the article HERE.
Posted by Joel Raupe at 9:16 PM