Space Geology: From the Moon to Mars 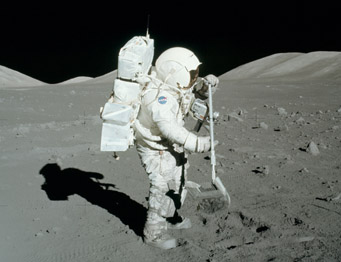 Dr. Harrison Schmitt, in one of the many now iconic photographs taken during his field expedition to Taurus-Littrow valley, samples the diverse lunar regolith. Eugene Cernan, Apollo 17, December 1972)

Harrison H. Schmitt, for Scientific American, July 2009 "Mountains higher than the walls of the Grand Canyon of the Colorado towered above the long, narrow valley of Taurus-Littrow. A brilliant sun, brighter than any sun experienced on Earth, illuminated the cratered valley floor and steep mountain slopes, starkly contrasted against a blacker-than-black sky. My crewmate Gene Cernan and I explored this nearly four-billion-year-old valley, as well as the slightly younger volcanic lava rocks and ash partially filling it, for three days in 1972—concluding the Apollo program. It was the first and, so far, only time a geologist has ever done hands-on study of another world. Now the U.S., the European Union, Russia and other international partners are contemplating sending astronauts to Mars to do fieldwork there, probably beginning within the first third of this century. What will be new and what will be familiar to the first geologist to step before a red Martian sunrise?"

Read the Feature HERE.
Posted by Joel Raupe at 4:26 AM