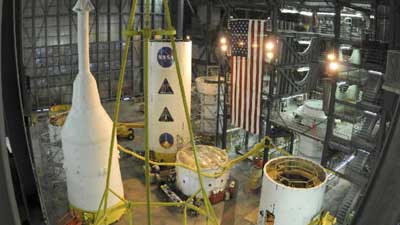 The violent shaking that threatens to destroy the Ares I rocket that NASA hopes will one day return astronauts to the moon is also threatening to delay — or even cancel — the first flight of its test version, the Ares I-X.

Air Force officials who have safety jurisdiction over all launches from Kennedy Space Center are worried that the rocket's vibrations could knock out the self-destruct mechanism required in case the launch goes awry.

If the Ares I-X went out of control during its scheduled launch Aug. 30, and the destruct mechanism failed, the rocket could threaten populated areas along the Space Coast.

Read the article HERE.
Posted by Joel Raupe at 5:08 AM