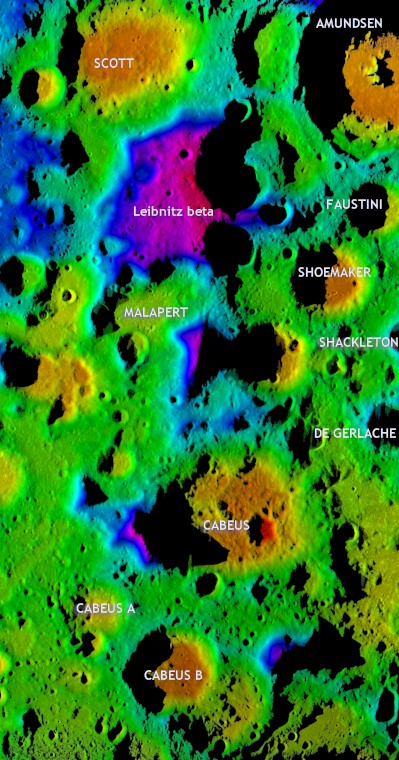 According to NASA JPL, a color image released today, a smaller part of which, with labels and at inferior resolution is reproduced above, "is the highest resolution topography map to date of the moon's south pole." It was generated at Pasadena "using data collected using the Deep Space Network's Goldstone Solar System Radar, located in California's Mojave Desert. The new map provides contiguous topographic detail over a region approximately 500 kilometers by 400 kilometers."
› Full resolution black & white jpeg (3.01 Mb)
› Full resolution color jpeg (3.74 Mb)

Leibnitz Beta is a disputed label for all that remains of an optical illusion; a mountain chain map makers once believed covered this area, beginning at 85 degrees south.

That remainder, as you can see above, is significant, however. An obvious massif, it appears clearly in these improved Goldstone radar maps, released June 18, and on the latest lidar maps produced by JAXA from Kagyua data, released last month. The lidar data from the U.S. NASA/DOD platform Clementine in 1994 probably deserves some credit, and many others, also, for having revealed its incredible true nature.
If you click on the black and white version above, you can see why Leibnitz β has not stood out like a sore thumb before, even from orbit overhead: crater saturation and depth perception, as it is seen in its surroundings from a distance. It eludes detection even in the remastered Lunar Orbiter IV image released by Moonviews (LOIRP) just this week.

Color photography did not improve things much. It took a lot of laser data points, and rare radar opportunities from Earth, to bring out the Lβ massif from its background.

The eventual impacts of the LCROSS Centaur upper stage (and its shepherding satellite) are likely to happen somewhere in the area seen above, though some better candidates for abyssal, permanently darkened crater targets are largely blocked from our view from Earth by Lβ and its companion, the comma-shaped "Malapert" mountain.

Malapert carries a name really owned by a crater group, centered "behind" it, where a single large crater was once thought to be. Kaguya's HDTV "earthset" features our world, falling out of view behind the peak, which was once also a candidate for a "peak of perpetual sunshine."

Indeed, the Sun almost always does shine somewhere along the spine of that mountain, though not always in the same spot. The name has probably stuck.

Lβ and Malapert mountain are actually part of a much larger feature. They are the Near Side parts of the outer wall of the oldest undisputed basin on the Moon, undiscovered until the Soviet Union took the first pictures of the Far Side in 1959.

From Malapert South Pole-Aitken Basin stretches past the Moon's South Pole (just out of view, near the rim of Shackleton to the right) and then north on the Far Side nearly to the equator. SPA Basin includs the lowest elevations on the Moon, twenty kilometers lower than the highest point on Lβ.

Original News Release from JPL
Posted by Joel Raupe at 6:12 AM