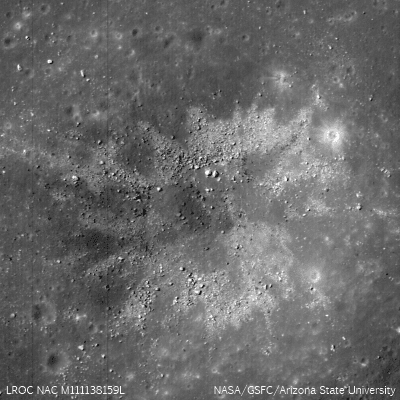 Materials excavated during formation of this ~450 meter diameter impact crater have an unusual two-toned character, likely a reflection of heterogeneity in the target materials. Situated in Balmer Basin (18.341°S, 69.950°E), the crater is in an area thought to harbor a type of cryptomare an ancient volcanic surface later covered with lighter hued impact ejecta. The darker material may be basaltic rock excavated from deeper parts of the impact. The scene is a 540 meter subset of LROC NAC M111138159LE [NASA/GSFC/Arizona State University].
Sandra Wiseman
LROC News System

The Balmer Basin Exploration Region of Interest (ROI) lies within the Balmer Crater, centered at about 20°S latitude and 70°E longitude. Balmer is an old, highly degraded crater some 110 kilometers across and is part of a larger basin structure called the Balmer-Kapteyn Basin, which has 225 km and 450 km diameter outer rings. Scientifically, this area is interesting because it contains a type of 'light plains deposit' that appears to lie on top of an ancient basaltic surface. Building on earlier studies of these deposits, Hawke et al. [2005] concluded the deposits formed by the deposition of material ejected by later-formed impact basins mixed with regolith that had developed on the old Balmer volcanic lava flows. This conclusion was based on the occurrence of numerous 'dark haloed' impact craters, such as one seen in the LROC featured image of August 31, 2009. 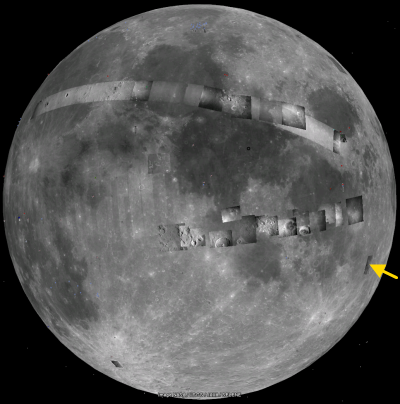 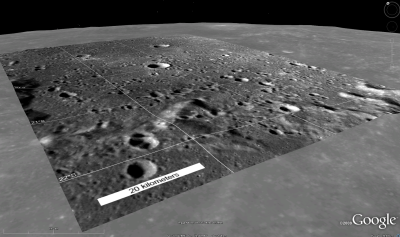 LROC WAC mosaic of central Balmer crater, M104054832CE and it's location, as seen in a "departure angle" view of the lunar globe available in Google Earth [NASA/GSFC/Arizona State University]. 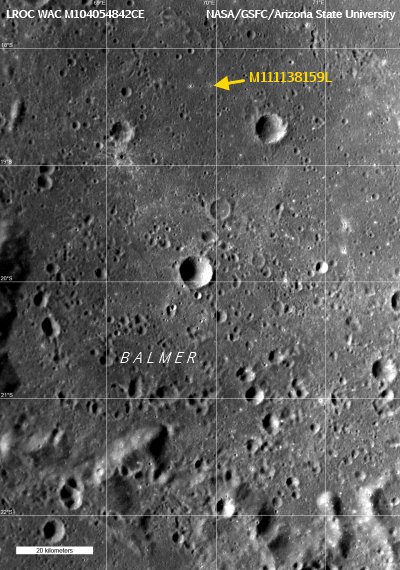 Perhaps dark-haloed craters are not the only types that reflect this dichotomy. Two-toned deposits are evident in the crater shown in today's featured image. This distinctive two-toned appearance is seen in some other similar-size craters in Balmer, but is not common. The regolith here is probably fairly thick, perhaps 50 to 100 m in many places. The regolith is a zone of mixing between the light-toned basin ejecta deposits and the underlying basalts. This crater appears to have excavated both types of materials.

Buried volcanic deposits such as the ones in the Balmer region have been called 'cryptomare' after Head and Wilson [1992], who defined geologic features such as this as "covered or hidden mare deposits that are obscured from view by the emplacement of subsequent deposits of higher albedo." [see also the November 16, 2009 featured image release]

Compositional information gleaned from orbital remote sensing supports the interpretation that the light plains are underlain by mare basalt, particularly by the presence of higher iron oxide (FeO) and magnesium oxide (MgO) content than is typical of the surrounding highlands deposits.

Narrow-angle Camera (NAC) images show the detail of the crater ejecta from bright relatively young craters over a range of sizes that serve as natural drill holes into the light plains deposits. Explorers, whether human or robotic, visiting the Balmer region would determine the composition of the regolith excavated by these craters to test for a mixture of highlands and mare rock components. The age and composition of the basaltic components would reveal new insights into the volcanic history of the Moon.

Explore the Balmer Exploration region of interest for yourself, HERE.