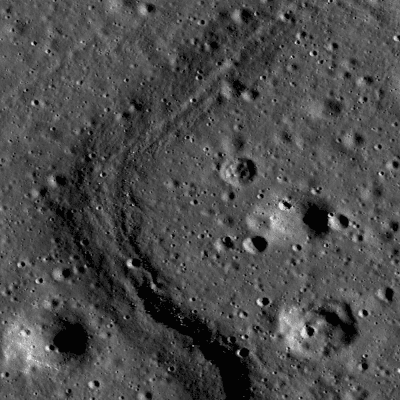 Two views from a high resolution (LROC Narrow Angle Camera) image of the floor of Apollo Basin, the large (see "The Biggest Deepest Crater," March 6) double-ringed impact crater in the southern hemisphere of the Moon's far side. This image shows part of the boundary between two flow units within the volcanic mare deposits on the crater's floor. 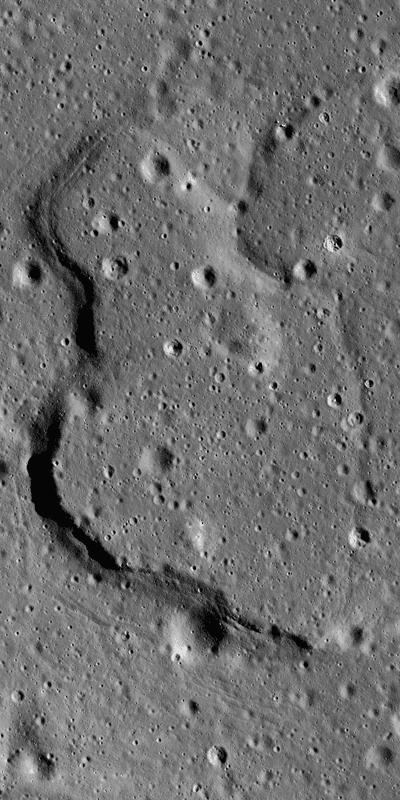 The sharp boundary between the topographically higher lavas on the right side of the image and the lower ones on the left reveals layers, suggesting that multiple volcanic events were involved in forming some of the isolated volcanic plateaus seen within the otherwise uniform crater floor lava flows. Both the high and low materials here are heavily covered in impact craters, indicating that these lavas, like much of the Moon's surface, are ancient. Many boulders can also be seen shedding out of the upper layers and eroding down onto the lower deposits. Image is 880 meters wide, and north is up. Part of NAC frame M114953774LE [NASA/GSFC/Arizona State University].
Jim Bell
LROC News System

Unlike features on the nearside, craters and other landforms on the Moon's fars ide were only discovered beginning with the advent of the Space Age. Thus, many features have names that reflect more modern historical figures, places, and themes. One such example is the Apollo impact basin, a 538 km wide double-ringed impact crater in the southern hemisphere of the lunar far side, centered near 36°S, 208°E. 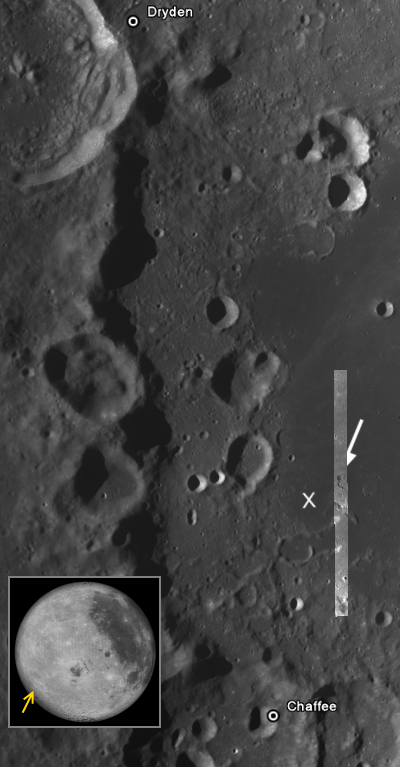 From a LROC Wide-Angle Camera mosaic (really worth a look here) showing most of Apollo Basin's northern, southern, and western inner ring as well as the central floor's dark mare basalt deposits. The white arrow shows the location of the high-resolution NAC image discussed above. The white "X", near the boundary of the smooth, dark floor deposits and the rougher, brighter inner ring highlands materials, is the center of one of the 50 Constellation Program ROI's or "regions of interest." The large (~51 km) crater at upper left is Dryden; the largest (~49 km) crater partially visible just to the left of center at the bottom of the mosaic is Chaffee. North is up, and the width of mosaic is 130 km [NASA/GSFC/Arizona State University].
This large feature was named in honor of the Apollo program (1968-1972), NASA's manned missions that culminated in twelve astronauts landing on the surface of the Moon, conducting scientific experiments and returning more than 380 kilograms of samples to Earth. Many individual craters within the Apollo Basin are named after deceased NASA astronauts and pioneers, including, more recently, craters named after the crews of the Space Shuttles Challenger and Columbia.

Apollo crater is an outstanding example of a concentric, double-ring impact structure, "transitional" in size, between smaller simple bowl-shaped and complex central peak or peak-ring craters and larger impact basins like Mare Orientale.

It is actually superimposed within the enormous, much older South Pole-Aitken (SPA) Basin, an impact structure that is one of the largest in the Solar System dominating the far side southern hemisphere. Apollo was selected as one of 50 sites for LRO to investigate in great detail as examples of the range of scientific questions and engineering challenges to be addressed in future human and robotic exploration of the Moon. The specific study area (centered on the white "X" in the WAC context image above) was chosen because of the presence of relatively rare far side deposits in close association with bright, presumably anorthositic highlands materials of the basin's inner ring of mountains.

Because the crater formed on the rim of the South Pole-Aitken Basin it's possible some of the materials excavated and uplifted by the Apollo Event may have originated at great depths, perhaps even down to the lunar mantle. The site also offers interesting operational challenges for astronauts and robotic missions, offering rare far side opportunities for science and exploration within both highlands and mare terrain.

Explore the Apollo crater Constellation region of interest for yourself, as well as other previously released images showing spectacular views of Orientale Basin and examples of simple bowl-shaped and complex central peak craters. 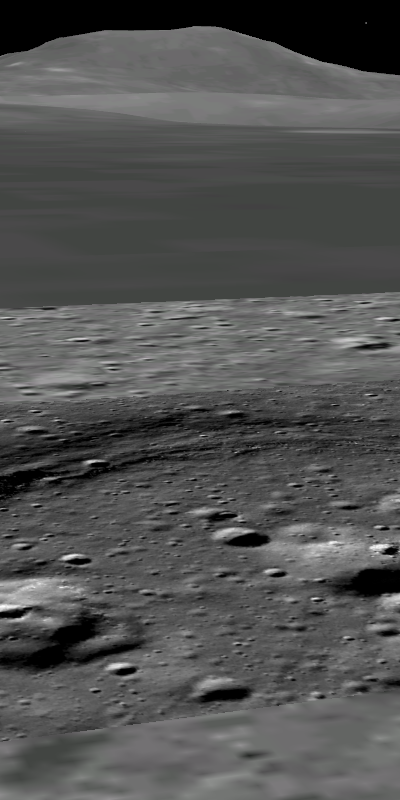