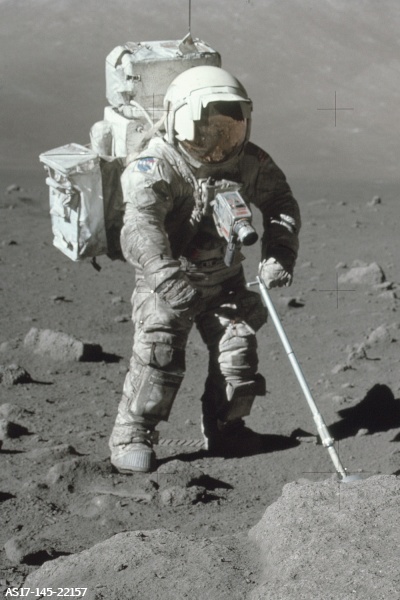 At Science Station 5 in the Taurus Littrow Valley Dr. Harrison Schmitt collects a regolith sample on the south side of boulders on the rim of Camelot, not far from the landing site of Apollo 17, during EVA-2 on December 13, 1972. Recent work has revealed a presence of small amounts of water and hydroxyl locked into Apollo sample material when only a "molecular shadow" of volatile compounds could be inferred during analysis decades ago. The recent work helps confirm a tenuous "hydrologic cycle" on the Moon first detected by instruments on-board Cassini and Chandrayaan-1 [Eugene Cernan/NASA JSC].

Recently NASA crashed two spacecraft into the moon and orbiters scanned the lunar surface for telltale light signatures—all to confirm the rocky body isn't bone dry after all.

But, it turns out, solid evidence for water on the moon was under our noses the whole time.

Tiny amounts of water have been found in some of the famous moon rocks brought back to Earth by the Apollo astronauts, scientists announced last Wednesday.

The water levels detected in Apollo moon rocks and volcanic glasses are in the thousands of parts per million, at most—which explains why analysis of the samples in the late 1960s and early 1970s concluded that the moon was absolutely arid.

"Only in the last decade have instruments become sensitive enough to even analyze water at those kinds of concentrations," said Gary Lofgren, the lunar curator at NASA's Johnson Space Center in Houston, Texas.

Lofgen, who wasn't involved with the new research, called it "solid work" worthy of further investigation.

Apollo 15 astronauts David Scott and James Irwin drove around the lunar surface for three days during their 1971 mission, but the moon hung onto its secret for the next 40 years. If only they had known that water-coated soil lay only metres away on the slopes of the Apennine mountains.

That's just one of the revelations to emerge since significant amounts of water were discovered on the moon last year. Lunar researchers are now poring over the 380 kilograms of Apollo samples for anything else we might have missed. The initial results, which were discussed last week at the Lunar and Planetary Science Conference (LPSC) in Houston, Texas, show how close we came to finding water earlier. There are also fresh clues to how the moon got the stuff in the first place.

In 2009, India's Chandrayaan-1 probe and two NASA spacecraft found water clinging to much of the lunar surface. Before Chandrayaan failed, its imaging spectrometer zoomed in on the Apollo 15 landing site. Analysis now shows that relatively water-rich soil exists on the Apennine slopes nearby. Driving to the water "would have been tough for their vehicle – but it was awfully close if they knew where to go get it", says Chandrayaan team member Roger Clark of the US Geological Survey in Denver, Colorado.

In fact, signs of water turned up in samples from all of the lander missions, but were disregarded because of possible contamination (see "How did we miss the moon's water?" below).

The moon is thought to have been covered by a magma ocean in its first few hundred million years, before lava flows repaved much of it. Apatite is one of the last minerals to crystallise out of these magmas – doing so when any water in the magmas would be at its most concentrated.

The teams found water in quantities up to 6000 parts per million in the apatite. They used a technique called secondary ion mass spectrometry, which bombards a sample with ions and then weighs the ejected secondary ions in a mass spectrometer to determine their atomic masses and abundances. "We couldn't have done these analyses 40 years ago, or even 30 years ago," says Larry Taylor of the University of Tennessee in Knoxville, a member of two of the teams.

One of the groups, led by James Greenwood of Wesleyan University in Middletown, Connecticut, found that the ratio of hydrogen isotopes in the apatite's water was unlike almost anything found on Earth. So where did the water come from? He believes comets may have crashed into the infant moon before its magma ocean crystallised, supplying the water. Or it may have come from a Mars-sized planet, dubbed Theia, that slammed into Earth 4.5 billion years ago to make the moon.

In the hope of mining more treasures from the samples, Taylor visited the Johnson Space Center in Houston, Texas, last week, to search through Apollo samples in a windowless building known as the "lunar vault". He says there's a small chance the Apollo 15 astronauts unwittingly collected some water-coated soil at the base of the Apennines, and that its signal might still be detectable even after contamination with water vapour on Earth. "I'm not overly optimistic that we're going to find anything," he says, "but you can never tell."

How did we miss the moon's water?

The Apollo samples contained water, so why were the signs disregarded?

Soil collected during all Apollo landings contained traces of water. And material scooped up by Apollo 16 had signs of methane and hydrogen cyanide, compounds found in comets – a possible source of the stuff.

The ugly spectre of contamination was raised because none of the 12 "rock boxes" carrying the Apollo samples kept their vacuum during transit, with about half returning to the Earth's atmospheric pressure. The boxes were also opened up at NASA inside cabinets filled with nitrogen gas that was later discovered to contain 20 parts per million of water. Indeed, early isotopic studies revealed suspicious similarities between the water in some lunar soils and on Earth.

Ambiguity plagued other hints of water. Researchers argued that brown rust stains on an Apollo 16 rock could have formed if the rock contained a mineral called lawrencite and was exposed even briefly to terrestrial water vapour. And reports of what appeared to be a water-bearing mineral called amphibole in several lunar samples simply "never caught on", says Apollo scientist Larry Taylor of the University of Tennessee in Knoxville.

Despite the uncertainties, these hints may have been dismissed too quickly due to "group think", says Apollo veteran David McKay of NASA's Johnson Space Center in Houston, Texas. "These [reports] were discounted very early because most lunar rocks showed no sign of water," he says. "It was almost taboo," adds Roger Clark of the US Geological Survey. "It really showed a bias in the science community."

Opinion began to shift in 2008, when a team led by Alberto Saal of Brown University in Providence, Rhode Island, found up to 50 parts per million of water inside tiny spheres of volcanic glass collected during the Apollo 15 and 17 missions. The water was concentrated at the centre of the beads, suggesting it was not a product of terrestrial contamination. That started a lot of people looking again at the Apollo samples, says Taylor. As a former sceptic, he admits he has had to "eat his shorts" now that water is confirmed.