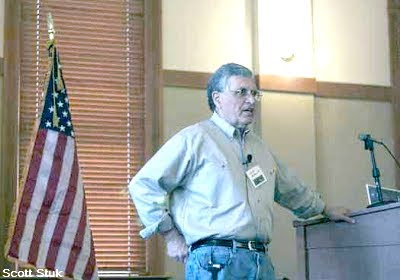 Dr. Harrison "Jack" Schmitt, former U.S. Senator (and twelfth of the twelve who first set foot on the Moon) keynotes a gathering of geophysicists at Arizona State University in January. He discussed data collected and archived from the Apollo Era and lessons for the present and future. On March 16 the American Society of Civil Engineers will recognized Dr. Schmitt with their inaugural Columbia Medal, which recognizes individuals who have made significant advances in the fields of aerospace engineering, science and technology. [Scott Stuk].

Harrison Schmitt's credentials as a space policy analyst include several days of walking on the moon. The Apollo 17 astronaut, who is also a former U.S. senator, is aghast at what President Obama is doing to the space program.

"It's bad for the country," Schmitt said. "This administration really does not believe in American exceptionalism."

Schmitt's harsh words are part of a furious blowback to the administration's new strategy for NASA. The administration has decided to kill NASA's Constellation program, crafted during the Bush administration with an ambitious goal of putting astronauts back on the moon by 2020. Obama's 2011 budget request would nix Constellation's rocket and crew capsule, funnel billions of dollars to new spaceflight technologies, and outsource to commercial firms the task of ferrying astronauts to low-Earth orbit.

The new strategy, however, has been met with outrage from many in the aerospace community. The entire congressional delegation from Florida, Democrats and Republicans alike, has sent a letter of protest to the president. Doubters fill op-ed pages and space blogs.

The administration apparently senses that it is losing the public-relations battle. On Sunday, the White House announced that the president, who has said almost nothing in public about his NASA strategy, will headline a conference on NASA policy April 15 in Central Florida. The format and location have yet to be announced.

Obama will be heading into what has become hostile territory.
Read the full article HERE.

With NASA's space shuttle program coming to an end and the future of the manned space flight in doubt, President Obama is facing intense pressure over his budget priorities for the space agency.

Read the full article HERE.
Posted by Joel Raupe at 5:17 AM