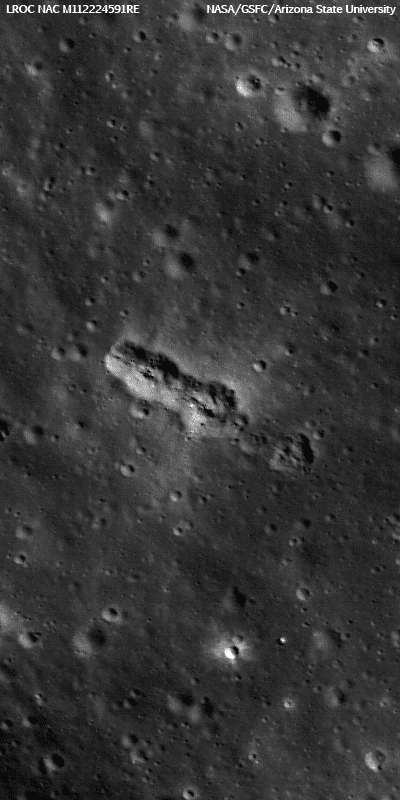 A small secondary crater chain near the southwestern margin of Mare Orientale, within the Inner Rook Mountains. The ~125-meter-long chain is within one of fifty Constellation Program regions of interest (ROI) in the multi-ring Orientale basin. LROC's full Featured Image is ~530 meters across and the above image is a 212 meters wide swath of LROC NAC M112224591R [NASA/GSFC/Arizona State University].
Zibi Turtle
LROC News System

This small chain of several craters likely formed from material ejected during the formation of a larger distant crater. The craters range from ~20 to ~30 meters in diameter and the entire chain is only ~125 m long. The irregular nature of the craters' floors and rims suggests that these are secondary craters rather than primary craters. Most chains of craters on the Moon are formed in this manner, but a few, like the 50-km-long Davy Catena (crater chain), are thought to have formed as a result of a series of impacts by fragments from a comet or asteroid that was disrupted when passing close to Earth. 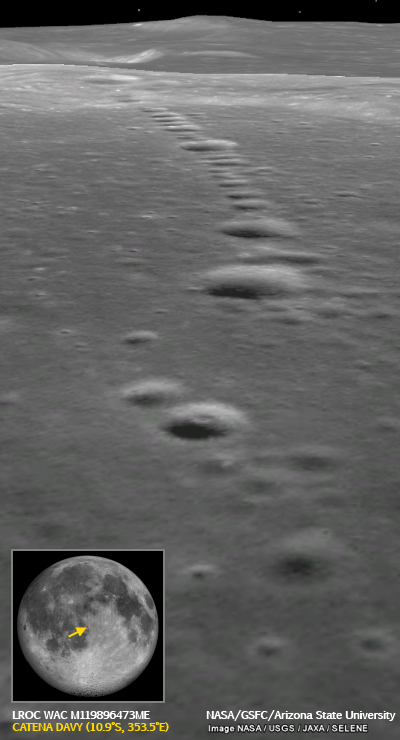 The 50-km-long Catena Davy (10.9°S, 353.5°E) in LROC WAC frame M119896473ME, projected onto the lunar frame in Google Earth; north is left. [NASA/GSFC/Arizona State University].
The small crater chain lies inside of the Inner Rook Montes toward the south-western edge of Mare Orientale. Orientale 1 is one of two sites near the Orientale Basin identified as regions of interest to the Constellation Program. It is of interest because of the proximity of highlands regolith and the Orientale Basin impact melt sheet, which is heavily fractured to the north of the site, as well as for its location on the limb of the Moon as seen from Earth, making radio communications easier. Obtaining a sample of the impact melt would allow scientists to date the formation of the Orientale basin, one of the youngest large basins on the Moon. 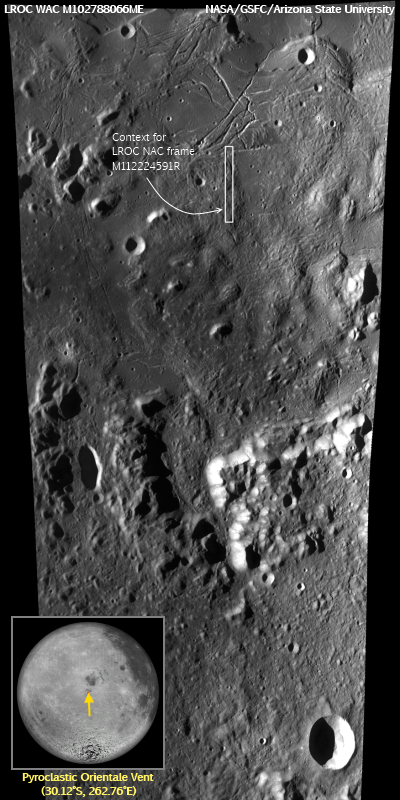 The small white rectangle illustrates the location and range of the LROC Narrow-Angle Camera (NAC) image that includes the small crater chain in the LROC News System Featured Image, and the scale of this small portion of the Orientale basin (the oblong vent (middle left) is the center of the Orientale pyroclastic formation, a feature that dominates this area of interest. The south-southwestern Inner Rook Montes run across top of this part of the larger frame (the Outer Rook Montes are visible in the full LROC wide-angle camera (WAC) image. These two intact mountainous rings surround Mare Orientale. (LROC WAC image M102788066ME; north is up.) [NASA/GSFC/Arizona State University].
NAC image M112224591R was acquired on 7 November 2009 from an altitude of 53.5 km and has a pixel scale of ~0.55 m.

Explore the Orientale Constellation region of interest for yourself.
Posted by Joel Raupe at 4:15 AM