Paul Spudis: "The Moon is Key" 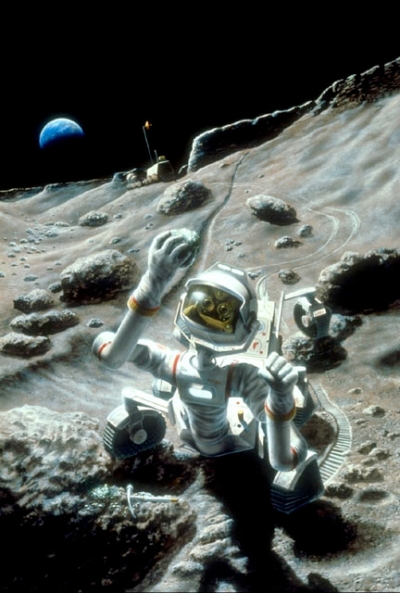 The Lunar Exploration Analysis Group (LEAG) held a Town Hall at the 41st Lunar and Planetary Science Conference, March 3. The agenda for their open-ended discussion, plus other documents from this influential group of scientists are all recommended reading, available here.

Stuck in Transit - Unchaining Ourselves from the Rocket Equation

Last fall, after much anticipation, the Augustine Committee presented us with their assessment of the future of space exploration. Its basic conclusion was that at currently envisioned budgets, the Program of Record (a.k.a. ESAS, Project Constellation) would not get us back to the Moon before many decades had passed, if then. This meme has been picked up by many in the space community to the point where is it now cliché to claim that we don’t have enough money to do anything in space. Hence, the direction proposed in the new budget takes NASA out of the space transportation business entirely, freeing up their budget to focus on technology development, and contracting with commercial providers to create access to low Earth orbit (LEO) and the International Space Station (ISS).

How are costs estimated for space systems? The costing exercise for the Augustine Committee was done by The Aerospace Corporation, a non-profit science and engineering company run for the U.S. Air Force. Their costing procedures (described briefly on page 82 of the committee report) includes estimating the time and level of effort it takes to develop a system, informed by data from past projects. The vast bulk of this costing effort deals with launch vehicles and systems.

Looking over cost estimates is a strange experience. Almost anyone can immediately see inflated levels of costing for things they know about, but are uncertain for other items. Bob Zubrin wrote a stinging rejection of the Aerospace Corporation’s costing just before the Augustine Committee released their report. He noted in particular that the estimates included several years of increasing ground operations costs, even while nothing was being launched. Of course, if you pull together a ground crew, you have to pay them to keep them around, even during slack times. But his point is a good one; why should it cost more than Shuttle does now to support a launch system that requires an order of magnitude less preparation than the highly complex Shuttle Orbiter?

Using these estimates of the cost of the existing architecture, the Augustine Committee concluded that it was unaffordable. What did they do then? Rather than fix the problems with the ESAS architecture, they discarded the entire Vision for Space Exploration and came up with the so-called “Flexible Path” (FP). Although cloaked in platitudes about how technology development will give us options to go to many destinations beyond LEO, the real motivation for this idea is revealed by the committee’s words on “public engagement” (e.g., “It (FP) would provide the public and other stakeholders with a series of interesting “firsts” to keep them engaged and supportive.” – Augustine report, p. 15). Thus, the goal of FP is to create Apollo-like spectacles for public consumption, rather than creating steps toward increased space faring capability.

We can wait and hope for the proposed technology development program to provide us with magic beans, or we can begin that process now by returning to the Moon with robots and humans to learn how to harvest and use its material and energy resources. Creating a sustainable system of space faring that can take us anywhere we want to go would be a real accomplishment. By gaining this knowledge and expertise, mankind will be free to choose many space goals, thereby achieving “at will” space destination capability.

Jeff Greason, President and co-founder of XCOR Aerospace and a member of the Augustine Committee, recently spoke at the annual Goddard Memorial Symposium. He asserted that for the near future, we have no path to move people beyond low Earth orbit because the options the Augustine Committee looked at cost more than the United States can afford or is willing to spend. His principal message to Symposium attendees was to “deal with it.”

According to the Augustine Committee, “The cost of exploration is dominated by the costs of launch to low-Earth orbit and of in-space systems.” This outlook is one reason why so much of the costing focus was on building Ares V, the super-heavy lift (188 mT) launcher designed for human Mars missions. For such a mission with chemical propulsion (the only technology currently available) you need about one million pounds in LEO, of which more than 70% is propellant. Going to Mars is expensive because you must lift all of that fuel out of the deep gravity well of Earth. Even with the economies of scale provided by a super heavy lift rocket, it still costs tens of billions of dollars to mount such a mission.

Making propellant on the Moon completely changes these numbers, yet use of lunar resources is discussed in only a few brief paragraphs of the Augustine report. We now know (as the committee did then) that water is present at the lunar poles in significant quantity and that its use to make rocket propellant can create a transportation system that could routinely access all of cislunar space. This should be the objective of lunar return: to create a space “transcontinental railroad” through the use of lunar resources. Once established, we can go to the planets with relative ease.

Is any of this possible under the existing budget? Not if we dissipate our money with pointless and unfocused technology development. Of the many advantages of the Moon, one of the biggest is that it is close enough that preliminary work can be done by robots on the lunar surface – controlled and remotely operated from Earth. By emplacing robotic assets on the Moon before human arrival, we can begin to survey, process and store water for use well in advance of human arrival. Sending robotic assets in advance of people allows us to start creating capability now, without a major increase in budget. It simply requires a sense of clear objectives; we have the technology to work this problem now.

Simply put, our space objectives need to be – arrive, survive and thrive. To do that, the goal must be stated, mapped out and achieved before setting out to the next destination. A sustainable, expandable transportation system in space can be devised by using the resources we find in space. We will learn how (and if) we can do this on our Moon. Once we don’t have to haul everything with us from the Earth, costs become lower. When you don’t have to use 90% of your travel budget just to get out of town, a lot more people can take the trip. Before you know it, you have a space-based economy.

The nation has important strategic and economic interests in cislunar space and it is entirely appropriate for the federal government to develop a sustainable and extensible cislunar transportation system. NASA needs to lead and point the way so that the private sector (not just aerospace companies) can invest in and develop the yet unknown technologies that will improve our lives here on Earth as we move out to explore and ultimately settle the new territory of space.

The Moon is a classroom, a test bed and a supply depot. By using its resources, humanity can create the capability to live, work and travel in and beyond cislunar space. As a nation, we cannot and must not pass on this enterprise. 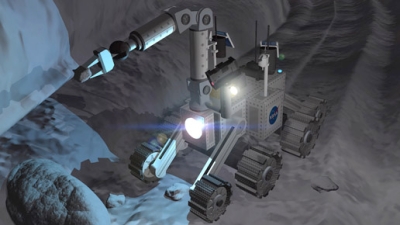 Sure appreciate this blog.

I think that the need to keep the public's support through manned missions or firsts is oversold. Funding for the development of the ISS continued despite there being no strong purpose nor particular ongoing firsts. The Martian rovers probably got more public attention/support during their tour than did the Shuttle/ISS operations during that same period of time.

If we first landed teleoperated robonauts on the moon there would be plenty of news. People could even experience the moon in real-time 3D via streaming videos on a NASA web page. The robonauts' activities would be in the context of manned space flight in that they would be preparing the ground as the day drew closer when the first human colonists would arrive.

What kept the ISS development moving along was that you had to continue because of all of the money put into it already. It would be stupid to spend 50% of the final bill and then, before it was completed, decide to cancel further development. Likewise, robonauts preparing the ground on the Moon for eventual humans would continue to get funding because stopping mid-way before completion would be like throwing all of the previously spent money away. But, in my mind, the difference between the ISS and the Moon is that, at the end of the day, you deorbit the ISS. But with a lunar base you continue. The main difference is the ready availability of resources on the Moon.

Visiting an asteroid or even the Martian moons is a waste of time IMHO. Is the purpose of visiting an asteroid just so that we can say that we did? Going to Mars first is just more expensive and dangerous. We should do the Moon first.

We need to start to think about a Plan B in case the Obama administration really sticks to canceling development of the Moon.

Can the goals be achieved by other means such as:
- quickly try and get Obama to say, "You misunderstood. I only meant to privatize Earth to LEO. Of course the rest of Constellation is still in play".
- get the Republicans to commit to lunar development and overturn Obama's decision,
- shame the US government into going back to the Moon by developing a consortium of SpaceX, Russia, China, India to pursue the Moon using a smart, less expensive approach.

But, again, what would it take to still do the Moon if we have to work with Falcon 9 Heavies delivering only 1,000 kg payloads to the lunar surface?

The moon is definitely the next frontier. With Mars and other planetary expeditions also possible from there. The finding of water on the moon is really exciting. There is also the water in vapour form that ISRO's CHACE instrument found recently that has been reported in Planetary and Space Science Journal. The moon missions need public support, because still many think space programs are a luxury that we cannot afford.