The Multiplying Mystery of Moonwater 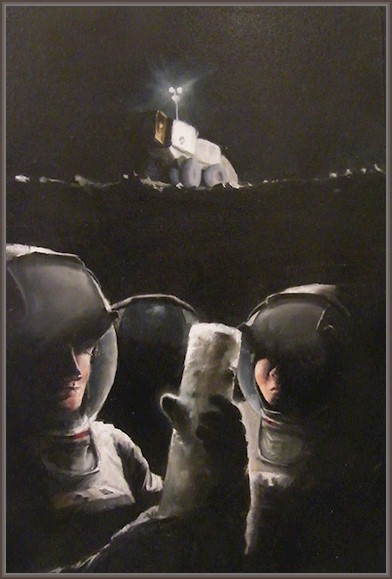 NASA Science News
Moonwater. Look it up. You won't find it. It's not in the dictionary.

That's because we thought, until recently, that the Moon was just about the driest place in the solar system. Then reports of moonwater started "pouring" in – starting with estimates of scant amounts on the lunar surface, then gallons in a single crater, and now 600 million metric tons distributed among 40 craters near the lunar north pole.

"We thought we understood the Moon, but we don't," says Paul Spudis of the Lunar and Planetary Institute. "It's clear now that water exists up there in a variety of concentrations and geologic settings. And who'd have thought that today we'd be pondering the Moon's hydrosphere?"

Spudis is principal investigator of NASA's Mini-SAR team – the group with the latest and greatest moonwater "strike." Their instrument, a radar probe on India's Chandrayaan-1, found 40 craters each containing water ice at least 2 meters deep.

"If you converted those craters' water into rocket fuel, you'd have enough fuel to launch the equivalent of one space shuttle per day for more than 2000 years. But our observations are just a part of an even more tantalizing story about what's going on up on the Moon."

It's the story of a lunar water cycle, and it's based on the seemingly disparate – but perhaps connectable – results from Mini-SAR and NASA's recent LCROSS mission and Moon Mineralogy Mapper (M3 or "M-cubed") instrument also on Chandrayaan-1.

"So far we've found three types of moonwater," says Spudis. "We have Mini-SAR's thick lenses of nearly pure crater ice, LCROSS's fluffy mix of ice crystals and dirt, and M-cube's thin layer that comes and goes all across the surface of the Moon."