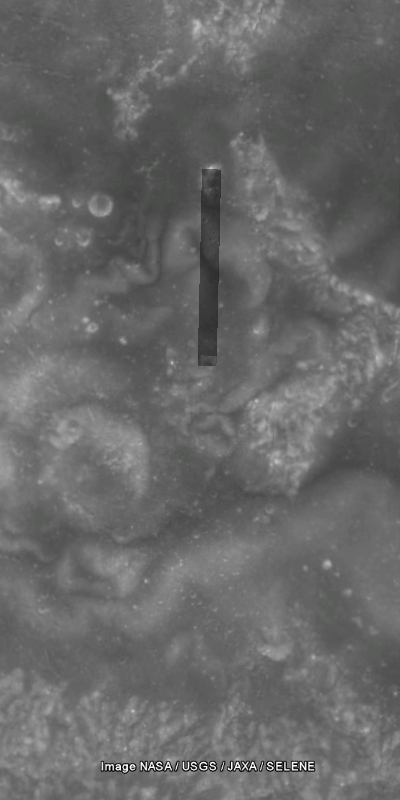 To offer some context to the public release, Monday, of 105,842 LROC images to the Planetary Data System simply take a look at the image above. On the lunar matrix in Google Earth we've superimposed half of a single set of two narrow-angle camera images. From hundreds of kilometers overhead, it doesn't look like much, and certainly not an image many of us have anxiously anticipated. That single little strip (LROC M105802305RE) represents 252 megabytes of information, seen here after being cropped into ten and a half 5000 by 5000 pixel jpg images, in this case 81 centimeters per pixel. Taken as a whole, it's gets us a lot closer to the Ground Truth concerning the dramatic Swirls of Mare Ingenii, on the Moon's far side, than any of us would have dared dream, even as recently as a one year ago [NASA/GSFC/Arizona State University].
Mark Robinson
Principal Investigator
Lunar Reconnaissance Orbiter Camera (LROC)
Arizona State University

"Today the complete set of science data from LROC’s first six months of observations, consisting of more than 100,000 lunar images, is available.

"The LROC EDR, short for Experimental Data Record release, includes 105,828 NAC and WAC products, totaling ~10 Terabytes. The Calibrated Data Record, referred to as the CDR release, will be approximately 105,000 products, totaling ~20 TBytes. An additional~ 9 TBytes of ancillary products will round out the release (total release 49.9 Tbytes).

"Each EDR and CDR product has an associated browse image and histogram of the observation Digital Numbers (pixel value). The browse image is a pyramidal TIFF file that is internally tiled with 256x256 tiles for rapid zooming. The layers are constructed by halving the resolution of the previous layer, starting with full resolution as the first layer until a layer is created with only one tile.

"Along with the EDR and CDR products, there is an INDEX.TAB file that contains information on each individual observation, the parameters commanded, estimated coordinates of the images on the lunar surface, lighting conditions, and other relevant information.

"New data will be released every three months. " 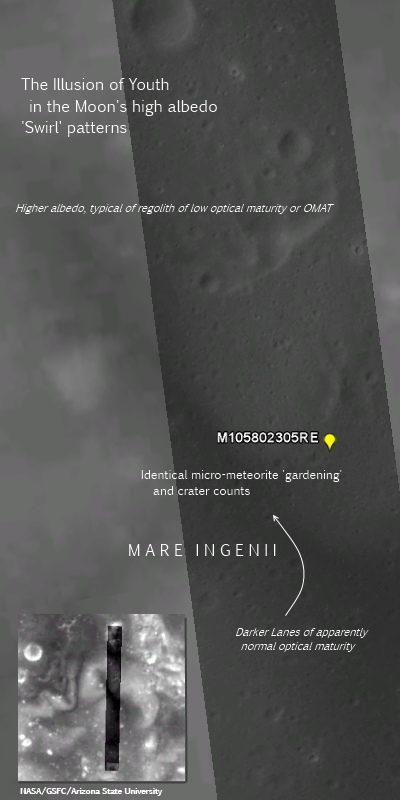 A single swipe, a few microseconds of exposure during LRO's 741st orbit, brings out the details, confirming years of theoretical supposition about the glorious Spider Swirl, a nested hue within a complex mini-magnetosphere and its effect on the migratory habits of electro-static lunar dust, a breathtaking series of alternating mature and anomalously immature patches of regolith that stretches far beyond the mare-filled basin of Ingenii. Inside the far side basin, away from the peaks and valleys of the lofty highlands, the patterns lend themselves to close analysis. Although paleo-magnetism has been demonstrated to be sufficient to ward off solar wind, to the point of creating miniature bowshocks close to the lunar surface, perhaps providing a sufficient shield against solar particle events, these same field lines are no extensive or large enough to stay off heavy, high-energy relativistic ions from deep space. The outside maximum time a typical field of lunar regolith could remain "optically immature" is estimated to be around 900 million years. The last inundation of the Ingenii basin took place more than 3 billion years ago.
Posted by Joel Raupe at 4:08 PM