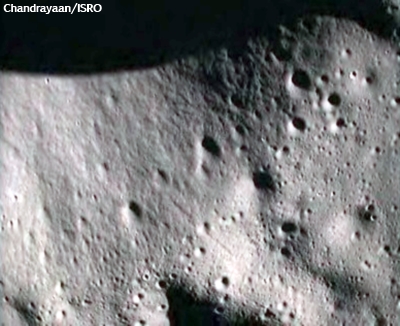 When this image appeared on the ISRO website in late November 2008, it was described as one of the last taken before the impact of the MIP ("Moon Impactor Probe"). But, was the image taken from MIP, an instant before the hardened sub-satellite hit the lunar surface "near" the Moon's south pole?" The website simply was not explicit. Based on the weak trickle of photographs shared by ISRO, Chandrayaan was obviously a wonderful surveys. Those few releases, however, were often accompanied with little or no information, missing lunar coordinates, for example. The image above may or may not be of a small crater on the slopes of Malapert Mountain - but who can tell? [ISRO]
Joel Raupe
Lunar Pioneer

Now comes a team - the young scientists who developed hardened instruments designed to survive the 22 g-force impact with the Moon and report on the aftermath of the Chandrayaan sub-satellite "Moon Impactor Probe" - claiming "Indian scientists" deserve more credit for "discovery of water on the Moon."

Whatever may be lost in translation, while we would like to see their data, credit for discovery of water on the Moon doesn't belong to any one country or lunar mission. Since I suspect that the team understands this, I'm straining to understand their real point.

Dr. Maqbool Syed writes in "Water on the Moon: How Indian Heroes Became Zeros" that he was part of the team that developed hardened spectrograph instrumentation for the ISRO lunar orbiter Chandrayaan-1. He wants to register a complaint, and he and his colleagues appear to believe they deserve credit (some or all is unclear) for discovering water on the Moon, and they cite papers they authored that were submitted to Nature and Science and subsequently rejected, "for silly reasons" according to Syed.

Although I don't pretend to know the whole story I think the controversy stems more from culture or language than over who gets credit. This seems not about any "gulf fixed" between United States and India, such as probably is. It seems instead the culture of Science or a concept of "Institutional Memory" is unnecessarily strained.

Because - for example - News (before the LCROSS impact) last September was not about any "discovery of water on the Moon." As Dr. Paul Spudis, chief scientist for the Mini-SAR experiment on Chandrayaan wrote at the time, "What’s surprising about this new data is not the presence of water, but its pervasiveness."

The news announced in the United States was of an unambiguous confirmation of a discovery of water first detected in happenstance by Cassini on the way to Saturn, and then confirmed by instruments on Chandrayaan - evidence of volatiles - including water - as part of a dynamic process at the Moon's equator, a lunar hydrologic cycle coinciding with with the arrival and departure of the terminator and even high-noon.

That announcement related to the presence of hydroxyl and water molecules where nothing but the empty thumbprint of volatile chemistry had been barely detected before.

Credit for the "discovery" of water on the Moon won't go to LCROSS or to Chandrayaan's Mini-SAR, despite this unambiguous detection of water (among a lot of other interesting things).

Credit probably won't go to the Lunar Prospector team, though the detection of vast stores of hydrogen inside and outside the permanently shadowed regions of the Moon's polar latitudes was the big headline from that unappreciated mission back in 1999.

In fact, the whole story and discovery deserving to be told is not yet complete. Even an announcement just last week by Spudis that constraints on the possible volume of water near the Moon's north showed a very large amount wasn't about a "discovery of water on the Moon." It was another big piece of a complex puzzle, a picture perhaps only 80 percent complete.

It's important to remember the picture coming together today- how water builds upon the Moon and how a very small fragment of this water manages to pile very high in the darkness - over billions of years - was considered wildly unlikely when first suggested a half century ago. As recently as a two years ago few would have dared suggest, whatever the nature of water on the Moon, that the ground truth rested near the upper limits of possibilities.

A decade ago - after Lunar Prospector - many of us would have remained content with the detection merely of hydrogen, knowing - knowing though it could be in the form of water, oxygen and solar energy were already obviously well-established parts of the lunar environment, and that the presence of hydrogen meant water could be manufactured, regardless.

I don't know why Nature and Science rejected the papers submitted by Dr. Syed and his colleagues. I want to know more. He claims "the mass spectrometer-based instrument called Chandra's Altitudinal Composition Explorer or CHACE," detected water in the aftermath of the (MIP) impact - "near Malapert Mountain."

The Moon Impactor Probe (MIP) was an unheralded sub-satellite that accompanied Chandrayaan to the Moon. Syed claims, when compared with the successes and failures of the U.S. Surveyor program (1966-1968) the triumph of India's Chandrayaan is notable.

He's correct, but he can thank the openness of the detailed history of Surveyor - available online down to the seconds, bolt torques and tank pressures for at least some part of India's notable success. He and his colleagues - like India - probably deserve lots of credit, but they also stand on the shoulders of giants. Where's the credit due to the theoreticians who figured all this out before either the U.S. or the Soviet Union managed to land anything on the Moon?

Syed should also understand citing published newspaper accounts from India or the United States is probably not the most credible way to establish a claim. I am genuinely anxious to read the results from any part of the Chandrayaan mission. We we heartbroken when the probe succumbed to the harsh thermal swings that are part of being in lunar orbit.

Keeping Chandrayaan going as long as ISRO did was truly inspiring, and that's a story I would like to read more of, also. ISRO has not helped its public relations by being stingy with Chandrayaan data. What few releases ISRO has made did not help India establish a well-deserved reputation for rocket science, for what anyone who bothers to examine the small amount of available evidence can tell was a spectacular survey.

The community of those who study the Moon will be unbiased in happiness, ready and willing to give credit to whom credit is due. I only suggest Dr. Syed and his team add their piece of the puzzle to the larger picture of discovery. Credit for "discovery of water" on the Moon belongs to the 20th century, not the 21st.
Posted by Joel Raupe at 3:16 PM

Hi, as an Indian I'll say that when the NASA investigators from the Moon Minerology Mapper team announced the discovery of water on the Moon, I found it noteworthy that what was reported was that 3 different spacecraft had found water on the Moon. Given that the other spacecraft had passed by the Moon quite some time before, why was the news suddenly being reported as if the discovery had been made years earlier? If Cassini had found water on the Moon years ago, then the announcement and claims of credit should have been made back then. But the fact is that Cassini had made no firm discovery, and the clinching evidence came from the hydroxyl signature detected by M3 aboard Chandrayaan-1. To me, it looks like retroactive revisionism, or "retconning". I'm all in favour of acknowledging the data from the earlier missions, but the fact that no clear announcing or finding was made by them at the time tells me that they didn't have any convincing case to make.

The fact is that the announcement of the discovery of water on the Moon came in 2009, and not in 1999 when Cassini took its readings. That in itself should be an indicator of which mission is responsible for the confirmation of water on the Moon. Otherwise, following your logic, we can also give credit to any little old lady back in 1608 who wrote in her diary about how she dreamt of water on the Moon, and say that M3's readings were consistent with what she wrote much earlier.

Instead of giving prominence to M3's findings, NASA and the predominating US media chose to suddenly revise history, and present it as if it had been common knowledge since 1999 that water was on the Moon. No - it wasn't. The discovery of water on the Moon came in 2009, by the M3 investigate team. It did not come in 1999, with the rest of the world somehow living in the dark for 10 years about what NASA had already discovered.

you wrote:
Credit for "discovery of water" on the Moon belongs to the 20th century, not the 21st.

If that's the case, then why were there no missions planned by NASA, ESA, Roskosmos or anyone else based on this so-called "20th-century discovery of water on the Moon"?

Based on your standards, we may as well also claim that bulk room-temperature superconductors were discovered during the 20th century - and we will make that claim as soon as we see someone else make a confirmed discovery sometime in the future.

I'm a pretty avid space buff, and I saw no articles from 1999-2008 talking about the confirmed presence of water on the Moon. But now, post-M3 announcement, there are of course plenty of such articles.

If somebody discovered water on the Moon or bulk room-temperature superconductors way back in 1999, they really should have shouted it out a little louder, rather than waiting for M3 in 2009 and making a retroactive claim.

That reminds me of IP-squatters who get patents on some obscure piece of intellectual property which has no value, without even trying to make a product or an invention out of it. And then once someone else invents something important which happens to involve that same patent, and makes lots of money out of it, then the patent vultures move in to sue for their share of earnings, claiming that those revenues were only accomplished with their prior intellectual property.

Nah, M3's findings stand on their own, and required no backing from Cassini or Deep Impact. The same can't be said for the previous 2 missions. That's why the announcement of the discovery of water on the Moon came in 2009, and not in 1999. If NASA felt that it had discovered water in 1999, then it should have held a full press conference rather than sitting on the information like an IP-squatter waiting until some other mission came out with something really fruitful.

Btw, I fully acknowledge that M3 and mini-SAR are NASA instruments, and the credit that is due to the investigative leadership of Carle Pieters of Brown, and Paul Spudis of the NASA-funded Lunar Planetary Institute

Your article has had the effect of Mr. Syed being removed - http://www.upiasia.com/Blogosphere/maqbool/20100306/water_on_the_moon_how_indias_heroes_became_zeros/. I think he could have put it more appropriately and with more evidence be shared. However, Chandrayaan datasets are not public - YET.

I do think that his claims of wrongdoing by Nature and Science magazines must be investigated. Did they play a role in ensuring that the announcement from US instruments came first? You may dismiss that a conspiracy theory - but it is worth looking into and it has been done before.

I believe there is some truth to what the ISRO scientists are saying.....Who would believe the little guys with no space experience. We all like to listen to authorities.

Really very relevant artical with the topic it is good work. http://www.translation.pk