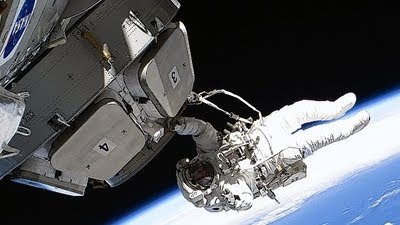 Nicholas Patrick during configuration of the newly installed cupola in February [NASA].

Ed. Note: By Friday, March 5 General Bolden was spinning the following and other stories relating to a 'Plan B' and referred to additions or changes made by Congress to the administration's proposed national space policy as Plan A, "version 2.0." Mark Matthews of the Orlando Sentinel picks up on that Follow-Up, Friday HERE.

NASA chief Charles Bolden has asked senior managers to draw up an alternate plan for the space agency after members of Congress indicated they wanted to reject a White House proposal to hire private companies to ferry U.S. astronauts into orbit and beyond.

In an internal National Aeronautics and Space Administration memo viewed by The Wall Street Journal, Mr. Bolden ordered officials to map out "what a potential compromise might look like" to satisfy critics on Capitol Hill. By calling for an alternative plan, Mr. Bolden threatened to undercut White House efforts to get its proposed NASA budget through Congress.

The White House is seeking to cancel major existing programs intended to build a new generation of government spacecraft and rockets to carry astronauts into space.