"Biggest, deepest crater" an excavation of the hidden, ancient Moon 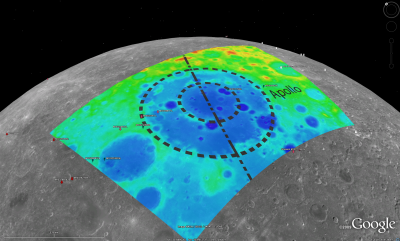 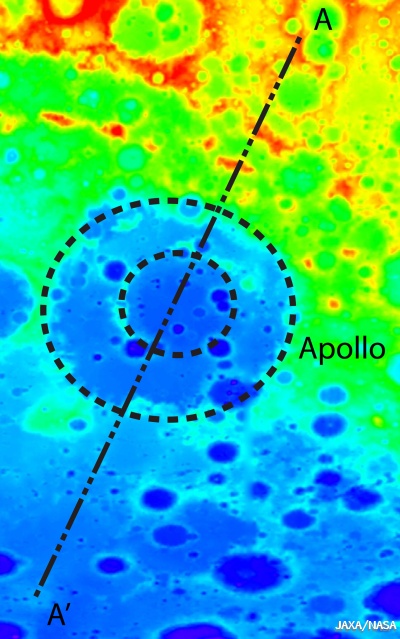 Shortly after the Moon formed, an asteroid smacked into its southern hemisphere and gouged out a truly enormous crater, the South Pole-Aitken basin, almost 2400 km across and more than 8 km deep.

"This is the biggest, deepest crater on the Moon -- an abyss that could engulf the United States from the East Coast through Texas," said Noah Petro of NASA Goddard Space Flight Center. The impact punched into the layers of the lunar crust, scattering material across the Moon and out into space. The tremendous heat of the impact also melted part of the floor of the crater, turning it into a sea of molten rock.

That was just an opening shot. Asteroid bombardment over billions of years has left the lunar surface pockmarked with craters of all sizes and covered with solidified lava, rubble, and dust. Glimpses of the original surface are rare, and views into the deep crust rarer still.

Fortunately a crater on the edge of the South Pole-Aitken basin may provide just such a view. The Apollo Basin was formed by the later impact of a smaller asteroid, but still measuring a respectable 480 kilometers across.

"It’s like going into your basement and digging a deeper hole," said Petro. "We believe the central part of the Apollo Basin may expose a portion of the Moon’s lower crust. If correct, this may be one of just a few places on the Moon where we have a view into the deep lunar crust, because it’s not covered by volcanic material as many other such deep areas are. Just as geologists can reconstruct Earth’s history by analyzing a cross-section of rock layers exposed by a canyon or a road cut, we can begin to understand the early lunar history by studying what’s being revealed in Apollo."

Petro presented his results Thursday during the 41st annual Lunar and Planetary Science Conference in The Woodlands, Texas.

Petro and his team made the discovery with the Moon Mineralogy Mapper (M3), a NASA instrument on board India’s Chandrayaan-1 lunar-orbiting spacecraft. Spectral analysis of images from the experiment revealed portions of the interior of Apollo have a similar composition to the impact melt in the South Pole-Aitken (SPA) basin. 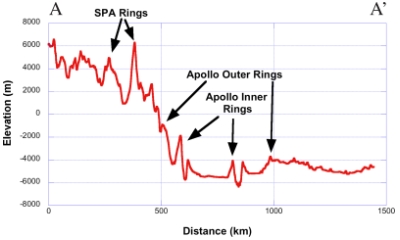 Image 2: This is a graph of the elevation (in meters) from the rim of the South Pole-Aitken basin through the Apollo basin made using data from Japan’s Kaguya spacecraft. The endpoints (A and A’) are marked in Image 1 above [JAXA/NASA/GSFC]. Full-resolution copy
As you go deeper into the Moon, the crust contains minerals have greater amounts of iron. When the Moon first formed, it was largely molten. Minerals containing heavier elements, like iron, sank down toward the core, and minerals with lighter elements, like silicon, potassium, and sodium, migrated to the top, forming the original lunar crust.

"The asteroid that created the SPA basin probably carved through the crust and perhaps into the upper mantle. The impact melt that solidified to form the central floor of SPA would have been a mixture of all those layers. We expect to see that it has slightly more iron than the bottom of Apollo since it went deeper into the crust. This is what we found with M3. However, we also see that this area in Apollo has more iron than the surrounding lunar highlands, indicating Apollo has uncovered a layer of the lunar crust between what is typically seen on the surface and that in the deepest craters like SPA," said Petro.

The lower crust exposed by Apollo survived the impact that created SPA probably because it was on the edge of SPA, several hundred miles from where the impact occurred, according to Petro.

Both SPA and Apollo are estimated to be among the oldest lunar craters based on the large number of smaller craters superimposed on over them. As time passes, old craters get covered up with new ones, so a crater count provides a relative age; a crater riddled with additional craters is likely to be older than one that appears relatively clean, with fewer craters overlying it. As craters form, they break up the crust and form regolith, an outermost layer of broken up rock gardened in to fine submicron-sized dust. 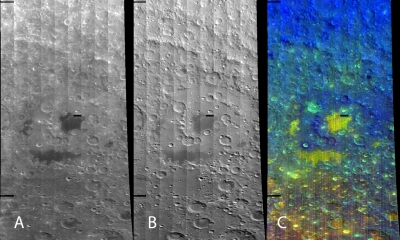 Image 3: Three views of the Apollo Basin taken with NASA’s Moon Mineralogy Mapper instrument on board India’s Chandrayaan-1 spacecraft. The false-color image on the right reveals composition; the blues indicate surfaces that don't have as much iron in them (highlands crusts which are low in iron in blue); other colors (teals, yellows, and oranges) indicate more iron-bearing minerals [NASA/ISRO]. Full-resolution copy
Although the Apollo basin is ancient and covered with regolith it still gives a useful view of the lower crust because the smaller meteorite impacts that create most of the regolith don’t scatter material very far.

"Calculations of how the regolith forms indicate that at least 50 percent of the regolith is locally derived," said Petro. "So although what we’re seeing with M3 has been ground up it still mostly represents the lower crust."

It’s likely Earth wasn’t spared the same bombardment experienced by the Moon. Giant craters on other worlds across the solar system, including Mercury and Mars, indicate bombardment was widespread. On Earth, however, the record of these events was largely eroded away long ago. Crust is recycled by plate tectonics and weathered by wind and rain, erasing ancient impact basins and obvious craters.

wow, great, I was wondering how to cure acne naturally. and found your site by google, learned a lot, now i’m a bit clear. I’ve bookmark your site and also add rss. kee p us updated. carrollbroscontracting.com