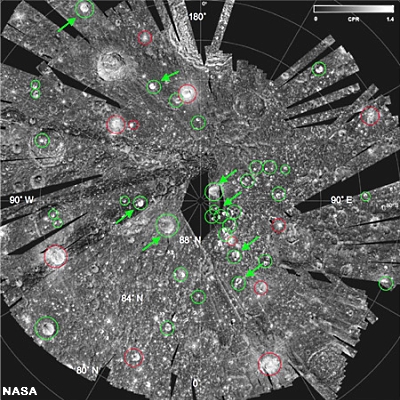 In this study of data from NASA's Mini-SAR flown on India's Chandrayaan-1 (and on LRO as the Mini-RF) high-reflectivity due to the coarseness typical of fresh craters has been circled in Red. Craters showing reflectivity anomalous of low-weathering (using methods discussed by Dr. Spudis here) are now believed to be indicative of water of remarkable purity measured in meters [NASA/ISRO].
Katherine Trinidad
NASA HQ

Using data from a NASA radar that flew aboard India's Chandrayaan-1 spacecraft, scientists have detected ice deposits near the moon's north pole. NASA's Mini-SAR instrument, a lightweight, synthetic aperture radar, found more than 40 small craters with water ice. The craters range in size from 1 to 9 miles (2 to 15 km) in diameter. Although the total amount of ice depends on its thickness in each crater, it's estimated there could be at least 1.3 trillion pounds (600 million metric tons) of water ice.

"The emerging picture from the multiple measurements and resulting data of the instruments on lunar missions indicates that water creation, migration, deposition and retention are occurring on the moon," said Paul Spudis, principal investigator of the Mini-SAR experiment at the Lunar and Planetary Institute in Houston. "The new discoveries show the moon is an even more interesting and attractive scientific, exploration and operational destination than people had previously thought."

During the past year, the Mini-SAR mapped the moon's permanently-shadowed polar craters that aren't visible from Earth. The radar uses the polarization properties of reflected radio waves to characterize surface properties. Results from the mapping showed deposits having radar characteristics similar to ice.

"After analyzing the data, our science team determined a strong indication of water ice, a finding which will give future missions a new target to further explore and exploit," said Jason Crusan, program executive for the Mini-RF Program for NASA's Space Operations Mission Directorate in Washington.

The Mini-SAR's findings are being published in the journal Geophysical Research Letters. The results are consistent with recent findings of other NASA instruments and add to the growing scientific understanding of the multiple forms of water found on the moon. The agency's Moon Mineralogy Mapper discovered water molecules in the moon's polar regions, while water vapor was detected by NASA's Lunar Crater Observation and Sensing Satellite, or LCROSS.

Mini-SAR and Moon Mineralogy Mapper are two of 11 instruments on the Indian Space Research Organization's Chandrayaan-1. The Applied Physics Laboratory in Laurel, Md., performed the final integration and testing on Mini-SAR. It was developed and built by the Naval Air Warfare Center in China Lake, Calif., and several other commercial and government contributors.

For more information about NASA's Mini-SAR, also known as Mini-RF, visit: http://www.nasa.gov/mini-rf
Posted by Joel Raupe at 12:31 AM