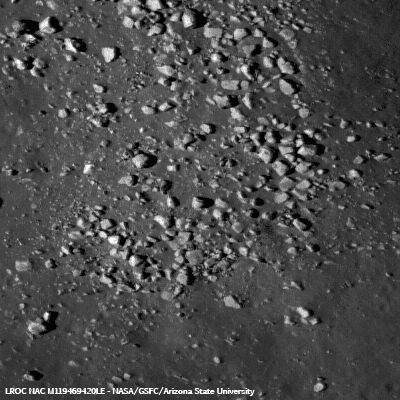 The Constellation program region of interest located in Mare Crisium is a compelling Exploration site for many reasons. First, this site was visited by several Soviet landers - Luna 23 and Luna 24 both touched down in Crisium. Luna 24 succeeded in returning a 170 gram sample in 1976. Though the amount was small, it provided a wealth of information and an interesting mystery. The Luna 24 basalt has a titanium dioxide content of about 1%, placing it among the lowest abundances of any lunar basalt sampled. The titanium content of basalts on the Moon varies widely, from almost none up to nearly 15%; a much wider range than typically seen on Earth. Because samples were only returned from a few limited locations on the Moon, we use remote sensing data to fill in the gaps of our knowledge (read this PSRD article for more details).

Basalts that are rich in titanium absorb more light in ultraviolet and visible wavelengths than those with less titanium, and many people have used this relationship to estimate titanium contents for mare basalts across the Moon. However, in the case of Mare Crisium, the remote sensing estimates put the titanium abundance at two to four times higher than what is seen in the Luna 24 samples. Plus, the way the light is reflected from the samples (the reflectance spectrum) looks different from what spacecraft observe for Mare Crisium. Other landing sites for which we have samples and that we have observed with spacecraft do not show this difference. So what is happening in Mare Crisium, and why should we care? 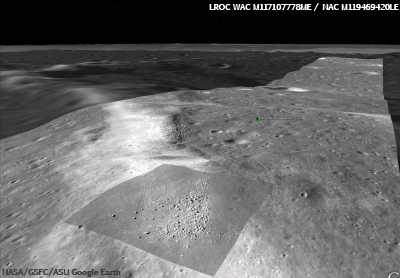 Lunar Pioneer was late posting the latest Featured Image released by Arizona State's LROC team on Thursday, March 11. We were stunned with an embarrassment of riches. The wide-angle camera context for a truly remarkable narrow-angle (49 cm pp resolution) image release happened to be of an area about which we have a strong interest. Coincidentally, the area happens also to be one among 50 Constellation Regions of Interest (ROI's), in the southwestern Crisium basin. So we took more time to boot up both images together in the lunar map available to users of Google Earth. Additionally, the ROI and LROC Featured Images are also within the eastern extreme of the highest resolution topography of the Apollo orbital corridor Digital Elevation Model. We have a lot more to say about this area shortly, including an expression of our heart-felt appreciation for the recent addition of a newer Moon-wide higher resolution DEM beyond the confines just of the corridor. For the present, a taste of these LROC images are presented here in three dimensions. 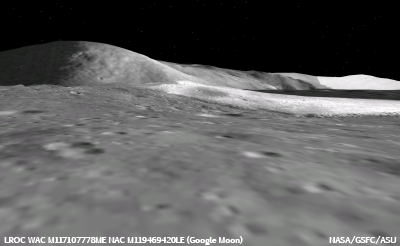 As you can see, within minutes after a LROC image availability, it is now possible to quickly present something not unlike what a future crew might see out the port-side view after landing at the SW Crisium Constellation ROI landing site, flawed though it may be in terms of overall illumination.
Scientists love a good mystery, but it's also important because titanium is both a valuable resource that could be utilized when people return to the Moon, and titanium abundances can tell us about the lunar interior. Basalts formed by partially melting the lunar mantle billions of years ago, and the wide range in titanium contents can tell us about the wide range of compositions and processes in the lunar mantle. Most of the high titanium basalts appear to be concentrated on the lunar nearside. But why? A straightforward interpretation of the lunar magma ocean theory, where the Moon was partially or completely molten just after its formation, suggests that titanium should be globally distributed, but that's clearly not the case. Human exploration of this region will produce valuable sampling and fieldwork to address this question.

The geology of this site is also compelling. The Constellation site is located near the rim of the Crisium impact basin (see image below), and samples and field work would give insight into the processes that occurred during the formation of the basin, as well as the age of the basin. Was this impact basin part of the so-called lunar cataclysm? This site also contains beautiful wrinkle ridges, sites of compressive stresses that resulted in faulting and wrinkling of the mare basalt surface. In the image below, you can even see a wrinkle-ridge ring, where a buried crater localized the stresses. 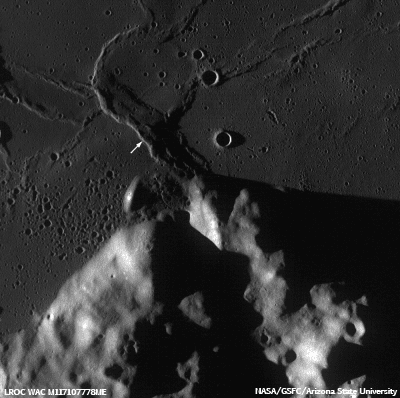 LROC Wide-Angle Camera (WAC) monochrome image centered on the Crisium Constellation region of interest (ROI). The highlands area in the south is the rim of the Crisium impact basin (nearly four kilometers in elevation above the "sea floor" below) and wrinkle ridges and the rim of one of at least three nearly submerged craters in the vicinity is apparent. The arrow points to the location of the center of the Narrow Angle Camera Featured Image and the WAC field is 62 km across [LROC WAC M117107778ME - NASA/GSFC/Arizona State University].
In the WAC monochrome image above, the arrow indicates the location of the NAC frame at the beginning of this post, which shows a very small portion of a wrinkle ridge. A fascinating feature of this ridge, when seen in high resolution, is a surface strewn with boulders. Perhaps these were generated by the breakup of the mare basalt, visible now because of the faulting and folding that created this ridge. (Judge for yourself exploring the full-resolution NAC frame here.)

Lunar scientists (not engineers) love boulders because they usually come from below the surficial regolith layer and can indicate buried rock units of different compositions. Some have suggested Luna 24 sampled a basalt unit that was buried by a subsequent lava flow of a different composition and only exposed where impact craters excavated material from a depth. This scenario would explain why spacecraft don't see the sampled material widespread on the surface. Visiting the Crisium region of interest could help scientists unravel this interesting puzzle.

Below: A very small part of the original LROC NAC image (M119468420LE) - 460 meter-square field reduced from the original here as context for the first image at the top of this post, and yet another demonstration of how scale can be a very difficult thing to grasp in lunar photography. In the Second Image from the TOP, the same area below is shown as the slightly darker gray square at bottom center, rendering the 460 meter field from a slightly different perspective and within the whole NAC frame strip from which it was taken - and subsequently within the larger WAC image release discussed her - all reproduced in Google Earth. (Click on image below for the 1000 pixel original). 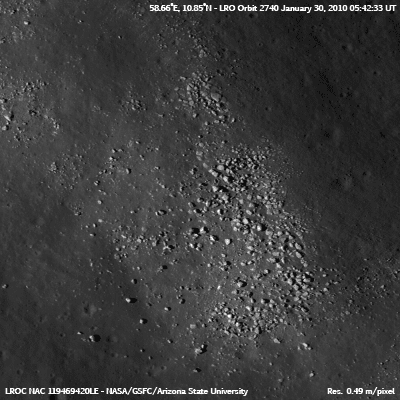 Below: In Google Earth, looking west, the whole of the ROI can be seen, though admittedly very poorly constrained to this 400 pixel-wide column. The scene below is also an unfortunate confusion of solar illuminations, with the LROC WAC image of the Region Of Interest highlighted by long evening shadow and the Apollo 15 metric imagery below and beyond when the area was under a late morning sun in late July 1971. Additionally, the very dark band of the LROC NAC Featured Image (visible in lighter gray in the Second image from TOP) traces out LRO polar orbit (#2740) of January 30, 2010. 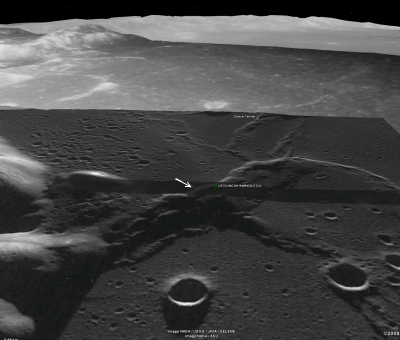 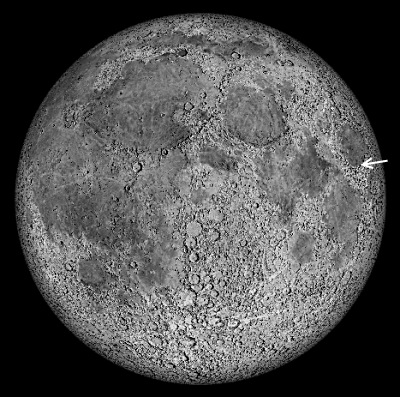