Surveyor 6 on the plains of Sinus Medii 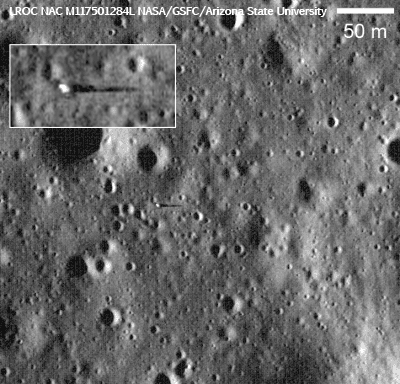 The Surveyor spacecraft (1966-1968) were designed to characterize lunar surface properties to help engineers design the systems astronauts would use exploring the Moon. Seven Surveyors were launched to the Moon and five succeeded in landing and returning useful data. Surveyor 1 landed in May 1966 and Surveyor 7, the final mission in the series, landed in January 1968.

Surveyor 6 Landed November 10, 1967 in Sinus Medii (0.5°N latitude, 358.6°E longitude), almost dead center on the near side of the Moon. One of its key experiments was measuring the surface chemistry with an alpha scattering detector, which showed the landing area to be basalt, similar to the surface measured by Surveyor 5. Surveyor 6 completed the data acquisition that the Apollo program needed and thus allowed Surveyor 7 to be sent to a site that was of higher scientific interest.

(Surveyor 4 was only 150 seconds from landing at the future landing site of Surveyor 6 the previous July when all contact was lost with the spacecraft during the terminal descent firing of its retro-rockets. Although it is believed Surveyor 4 exploded at that moment its official impact point, and a possible candidate for a LROC search for wreckage, is within 4 kilometers of Surveyor 6.)

The Surveyor 6 spacecraft survived one two week lunar night, but no significant data were returned after contact was reestablished on December 14, 1967.

A second panoramic view obtained by Surveyor 6.
Near the end of the nominal two week mission NASA engineers commanded the Surveyor 6 engine to fire for a few seconds. The spacecraft rose about 4 m above the surface and landed about 2.5 m from its original landing spot. This was the first successful liftoff from the lunar surface. And perhaps the only spacecraft to land twice on the Moon. 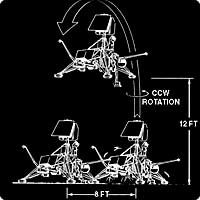 Diagram of the 6.5 second flight, or hop (diagram from the Boeing Company)
A quick note on lighting conditions.

Due to the Moon's slow rotation, the solar incidence angle is always changing at a a given site as LRO passes over. With time LROC can image a feature under varying lighting (from dawn to noon to dusk) thus providing a powerful tool for confidently identifying small features, such as the Surveyors, and fully understanding the subtleties of the local geology. 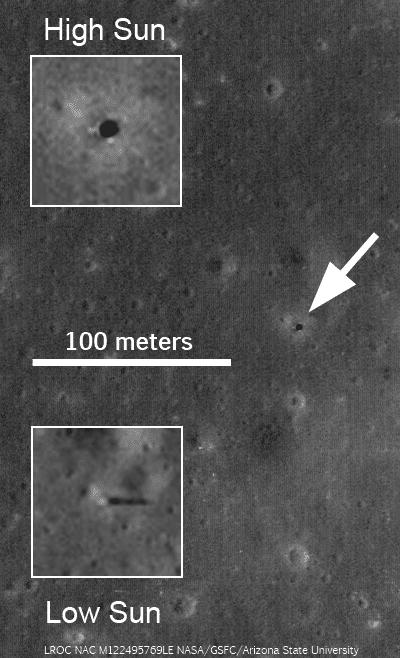 Surveyor 1 imaged by LROC under two very different lighting conditions. The background image (M122495769LE) was acquired with the Sun 67° above the horizon - the Surveyor is indicated with arrow and enlarged in the top inset. The lower inset shows the same Surveyor imaged with the Sun 14° from the horizon (M102443995LE) [NASA/GSFC/Arizona State University].
Images taken towards noon emphasize subtle differences in albedo (apparent reflectance or brightness) while images taken with the Sun low to the horizon bring out topography. From the high Sun images we see at all landing sites (Apollo, Surveyor, Luna) that the blast from the descent engines locally changed the surface albedo to varying degrees. This effect is mostly likely due to the engine plume rearranging dust particles of different sizes. The magnitude of the effect may be different in the highlands vs the mare.
LROC Images of Surveyor 1, LROC Image of Surveyor 3 and Apollo 12 & LROC Image of Surveyor 5.
Posted by Joel Raupe at 12:19 AM