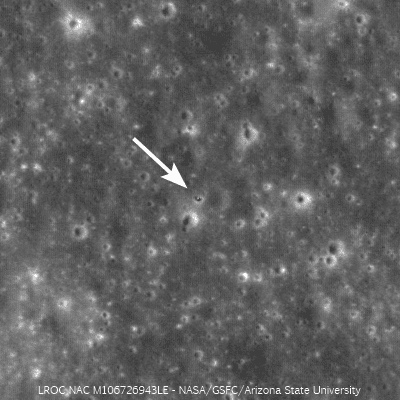 Surveyor 5 (At least we found the right image), swept up by the LROC narrow-angle camera on-board LRO during orbit 870, September 4, 2009, from 122.38 km over the southeastern Sea of Tranquility. (Three cheers to the LROC team for not leaving us hanging out on a limb for very long, also for superior patience and eyesight). The JPL-operated robotic lander built by Hughes Aircraft sits silently within the rim of a 10 meter crater (1.41°N 23.18°E) ~24 km northwest of Tranquility Base. (LROC NAC M106726943LE, resolution 1.24 m/p, width ~480 meters [NASA/GSFC/Arizona State University].
Mark Robinson
LROC News System

Surveyor 5 landed on Mare Tranquillitatis on September 11, 1967, in what must have been a harrowing touchdown. As pictures arrived on the ground it became apparent that the spacecraft had landed on the steep slopes of a small impact crater. After careful analysis of the images, including star field pictures, the Surveyor team was able to determine that the local slope was 19.7°! 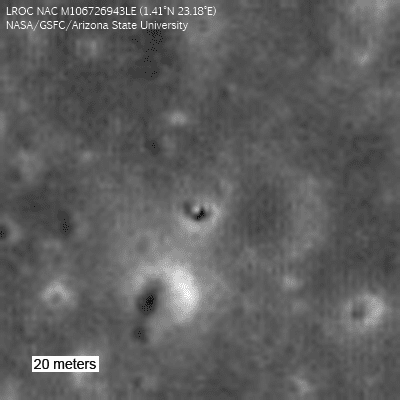 The spacecraft performed all its assigned tasks, returning thousands of detailed pictures and measuring the chemistry of the soil. Less than two years after Surveyor 5 landed Neil Armstrong and Buzz Aldrin set down Apollo 11 Lunar Module Eagle less than 30 kilometers away, and gathered samples with chemistry similar to those measured by the Surveyor.

Find Surveyor 5 for yourself in the full resolution NAC image M106726943LE.