Ice at the North Pole of the Moon 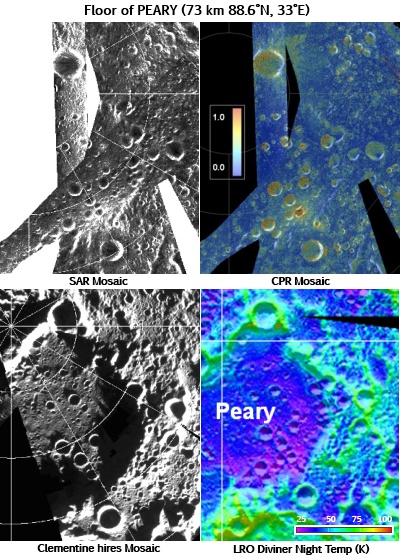 Land of a Thousand Lakes - Sampling of the nearside-east quarter of the environs of the lunar north pole shows some of the where hectares of water are located. It's easier now to see why Lunar Prospector (1998) originally sniffed twice the signature of hydrogen at the polar regions of the Moon's north than in the south [Paul Spudis NASA/JPL/ISRO].
Paul Spudis
The Once and Future Moon
Smithsonian Air & Space

Last year, India’s Chandrayaan-1 lunar orbiter spent eight months mapping the surface of the Moon. I had the honor of being the Principal Investigator of an experiment on that mission, the Mini-SAR imaging radar. The purpose of this experiment is to map and characterize the deposits within permanently dark areas of the poles. These dark areas are extremely cold and it has been hypothesized that volatile material, including water ice, may be present in quantity here. Our radar team has just finished the first round of analysis of data returned by the Mini-SAR for the north pole and results will soon be published in the technical journal, Geophysical Research Letters.

Mini-SAR is a lightweight, low power imaging radar. It uses the polarization properties of reflected radio waves to characterize the lunar surface composition and physical state. Mini-SAR transmits pulses of left-circularly polarized radar. Typically, reflection from planetary surfaces reverses the transmitted polarization, so that Mini-SAR radar echoes from the Moon are right circularly polarized. The ratio of received power in the same sense transmitted (left circular) to the opposite sense (right circular) is called the circular polarization ratio (CPR). Most of the Moon has low CPR (about 0.3), meaning that a reversal of polarization is the norm, but some specific areas have high CPR (greater than 1.0). These include very rough, rocky surfaces (such as a young, fresh crater) and ice, which is transparent to radio energy. In this latter case, the radar penetrates the ice and is scattered and reflected multiple times by inclusions and flaws in the ice, resulting in the reflection of many same sense polarization echoes, leading to higher CPR values than normal. High values of CPR are not uniquely diagnostic of either surface roughness or ice; we must take into account the geological setting of the high CPR signal to interpret its cause.

Many craters near the poles of the Moon have interiors that are in permanent shadow from the Sun. These areas are very cold and water ice is stable permanently there. Fresh craters show high degrees of surface roughness (high CPR) both inside and outside the crater rim, caused by sharp rocks and block fields that are distributed over the entire crater area. However, Mini-SAR found craters near the north pole that have high CPR values inside, but not outside their rims. This relation suggests that the high CPR is not caused by roughness, but by some material that is restricted within the interiors of these craters. It is not geologically reasonable to expect rough, fresh surfaces to be present inside a crater rim but absent outside of it. The craters that show this enhancement are all permanently cold and dark, where ice is stable. We thus interpret this high CPR to mean that water ice is present in these craters.

The Moon is the key to sustainable human presence in space.

Over forty small (2-15 km diameter) craters near the north pole of the Moon are found to contain this elevated CPR material. The total mount of ice present at the pole depends on how thick it is; to see this elevated CPR effect, the ice must have a thickness on the order of tens of wavelengths of the radar used. Our radar wavelength is 12.6 cm, therefore we think that the ice must be at least two meters thick and relatively pure. At such a thickness, more than 600 million metric tones of water ice are present in this area. Such an amount is comparable to the quantity estimated from the 1998 Lunar Prospector (LP) mission’s neutron spectrometer data (several hundred million metric tones). The LP neutron spectrometer only sees to depths of about one-half meter, while we penetrate at least a couple of meters, so the neutron data would underestimate the total quantity of water ice present.

The emerging picture from many experiments on several different lunar missions indicates that the creation, migration, deposition and retention of vast amounts of water are occurring on the Moon. Such an astounding result was totally unexpected by most lunar scientists, including myself. The emerging picture is consistent with earlier studies from the 1994 Clementine mission and subsequent Lunar Prospector as well as the more recent reports of the presence of water-bearing minerals at high latitudes (Moon Mineralogy Mapper), the detection of water vapor in the LCROSS impact plume (a few percent water content at its target site), and a variety of new supporting measurements, such as the discovery of unexpectedly cold polar temperatures by the DIVINER experiment on NASA’s Lunar Reconnaissance Orbiter (as cold as 25 degrees above absolute zero, colder than the estimated surface temperature of Pluto). The Moon experiences complex geological processes that were wholly unexpected before the recent results.

The quantity of water present at the lunar poles is significant; at the north pole alone, the 600 million metric tons of water there – turned into rocket fuel – is enough to launch the equivalent of one Space Shuttle (735 mT of propellant) per day for over 2000 years. The discoveries we are now making show that the Moon is an even more interesting and attractive scientific and operational destination than we had previously thought. The Moon is the key to sustainable human presence in space. Its resources enable us to create a reusable, sustainable transportation system, one that can routinely access not only the Moon, but all points of cislunar space. Once established, such a system can be used to go forward into the Solar System.

See carefully Mini-RF data at other portions such as craters on Mare Orientale.
There are a lot of similar features: High CPR inside but low CPR ouside. Are there water ice deposits in even Mare Orientale, and other equater regions ? No...

In addtion, your estimates referring to the "possible" concentration on the crater of north pole craters (maybe in Eke et al.; Icarus 200 (2009) 12–18 ?)will mislead people too much. You should fairly refer to the result of LEND which shows no concentration signiture on PSRs.

********************
NASA should carefully follow the conclusion by Spudis's group. Actions based on wrong information will make us to be called as "stupid", again.