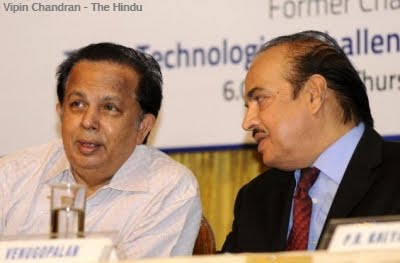 The confirmation of the presence of water on the moon by Chandrayaan-I probes will open vast opportunities for space research, says G. Madhavan Nair, former chief of the Indian Space Research Organisation (ISRO).

This could reduce the necessity to carry expensive payloads of oxygen and fuel by future space missions. This could drastically cut the cost of space research. At present, every kilogram of payload cost $50,000, thus making space explorations prohibitively expensive.

“It is a path-breaking finding,” Mr. Nair, who was at the helm of the Chandrayaan-I project, said in his K.P. Hormis Memorial Lecture here on Thursday. “It is one of the greatest findings from the space exploration.” (NASA had early this week announced that its radar onboard India's lunar orbiter Chandrayaan-I had detected vast ice deposits near the moon's north pole.)
Read the article in The Hindu, HERE.
Posted by Joel Raupe at 6:05 PM