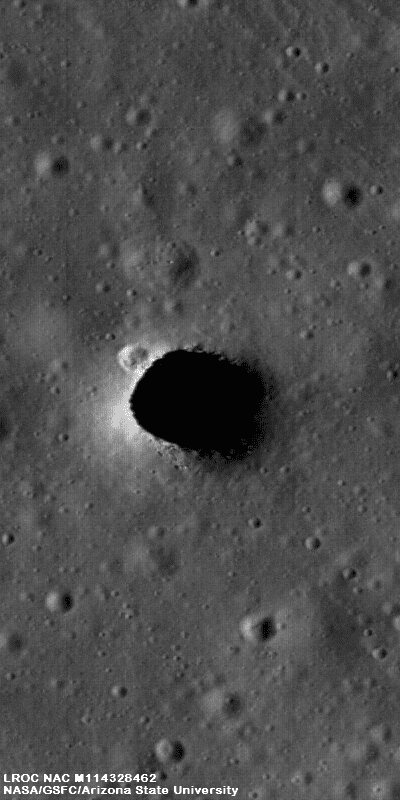 Enlargement of the Marius Hills Hole, or MHH, thought to be a collapsed roof and entrance to "Haruyama Cavern," unofficially nicknamed for the Japanese SELENE Terrain Camera investigation team leader who discovered it within the Marius Domes formation of Oceanus Procellarum. This new and closest look ever by NASA's LROC narrow angle camera reveals a small crater on the northwestern edge and small boulders on the southern lip of the hole, which is only around 65 meters in diameter. [LROC NAC M114328462R-NASA/GSFC/Arizona State University]. 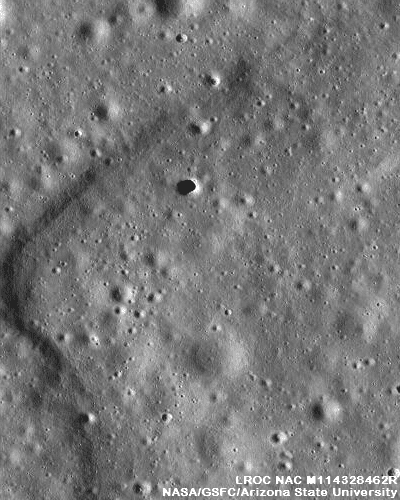 The Marius Hills Hole may access answers to morphological mysteries, revealing a new layer of this ancient volcanic region of the Moon called the Marius Hills, a formation familiar to observers of the Moon each time the long shadows of the terminator reveal many roughly 300 meter high domes named for the crater Marius to the east. Aristarchus Plateau is not far away to the north and Reiner Gamma swirl with its magnetic anomaly with its familiar bright complexity has a terminus here and meanders far to the southwest. The full LROC image was swept up December 1, 2009 during LRO orbit 1982, and has a resolution of one-half meter per pixel. The 2.5 kilometer width of M114328463R centers on 13.92°N, 303.21°E and shows a section of a sinuous rille with MHH opening into an underlying lava tube [NASA/GSFC/Arizona State University].
Carolyn van der Bogert
LROC News System

The Marius Hills hole was discovered in data from the Japanese SELENE/Kaguya Terrain Camera and Multiband Imager, and reported in Geophysical Research Letters. The Japanese team, led by Junichi Haruyama, made multiple observations of the hole using both the Terrain Camera and the Multiband Imager at resolutions as high as 6 meters/pixel (see below). The LROC image presented here (above), at 0.5 meters/pixel, is the highest resolution image of the Marius Hills hole to date! (The SELENE/Kaguya Terrain Camera team also made a fly-over movie of the hole, which is available on the JAXA website.) 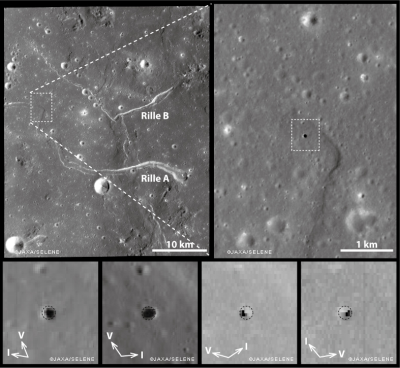 Images of the Marius Hills Hole as observed under different solar illumination conditions by the SELENE/Kaguya Terrain Camera and Multiband Imager [JAXA/SELENE].
How did the Marius Hills hole form? The Marius Hills region was quite volcanically active in the past, and contains numerous volcanic features, including sinuous rilles. Sinuous rilles are long meandering channel features, like those labeled Rilles A and B in the above figure. Before the Apollo missions, sinuous rilles were thought to be formed by running water on the surface of the Moon! However, today we know that sinuous rilles form in two different ways: as open lava channels and/or as lava tubes, many of which subsequently collapse. Because the Marius Hills hole is in the middle of a sinuous rille, it likely represents a hole in the roof of a lava tube. The hole itself may have been caused by an impact that punched through the lava tube roof.

Lava tubes might be useful as locations for lunar bases (see a report by Fred Hörz of JSC here). The interiors of lava tubes could protect human explorers from different aspects of the lunar environment, including cosmic rays, meteorite impacts, and the extreme temperature differences between the lunar day and night. Just like caves on the Earth, lunar caves, including lava tubes, have temperatures that are constant.

Browse the entire LROC NAC image to explore the intriguing Marius Hills hole and its surroundings. 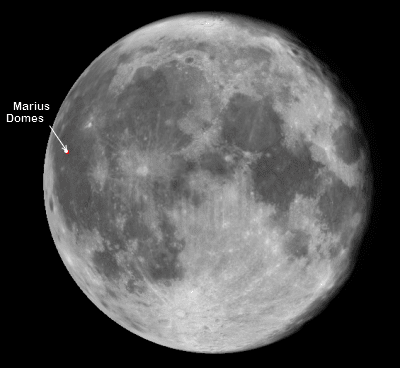