LOLA's Tycho and the Apollo era 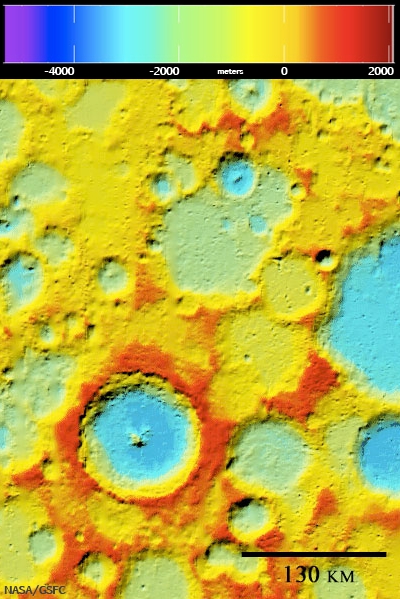 Take away the rays, so distinctive to the Moon's geocentric and always apparent "near side" and what remains is a crater not unlike others elsewhere on our proportionally large natural satellite. The Queen of the Southern Highlands is young, only ~109 million years or so, as theorized by astronaut-geologist Harrison Schmitt and others (~100 ma) and then confirmed in far-flung samples of this mass-wasting event gathered by Cernan &Schmitt 2260 km away, during their "field expedition" also known as "Apollo 17."

Tycho's hemisphere-encompassing ray system isn't even unique on the Moon. Closer in to the impact, as seen in simple numbers instead of it sometimes blinding relative brightness some features in Tycho's immediate surroundings end up standing out in the image created. To the northeast are craters apparently flooded by molten material from down below.

Sasserides A, for example, is definitely not on anyone's hit parade of interesting nearside objects.

And even more ancient than Sasserides A or Tycho is the intervening and "tortured," partially filled-in crater with a southeastern rim joined at the hip to Tycho's northeast by an equally ancient, far smaller filled-in crater.

Each of these impacts (of the Pictet cluster) just don't stand out to our eyes, so close to Tycho. Sasserides and the others each had their day in the Sun, though, perhaps even outshining brazen Tycho in their time.

From Friday evening's weekly release, from the Lunar Orbiting Laser Altimeter (LOLA) at Goddard Space Flight Center:
"Tycho's average depth below the rim is 4,700 meters. It has a central peak that rises 2,400 meters above the crater floor. Tycho and the craters surrounding it are part of the lunar southern highlands." 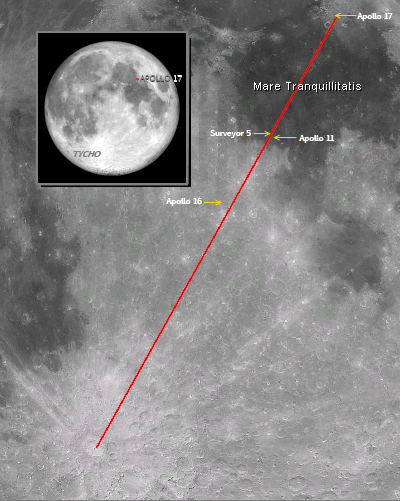 Tycho's ray system far outshines the impact itself. Not all its mysteries are fully understood. Do parallel twin rays suggest two progenitors, as suggested at Copernicus? As seen below definitive dating for the Tycho Event was hoped for and found by Cernan and Schmitt. The bright Tortilla Flats landslide material could, it was shown, be traced back to a "mass-wasting" pressure wave along a Great Circle route to Tycho, coinciding with surface material characteristics near Apollo 11, Surveyor 5 and Apollo 16. This most sampled of Tycho's rays is not, however, it's brightest [VMA v.5/Google Earth]. 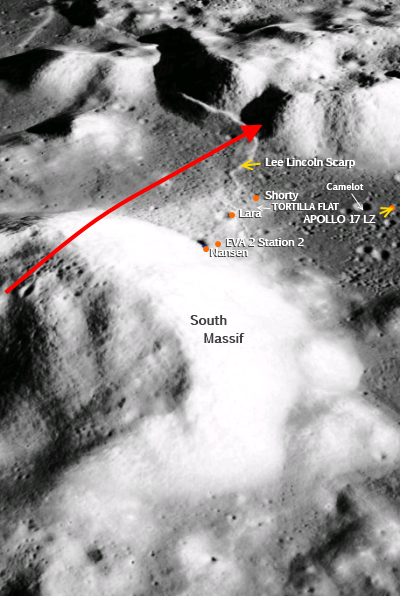 Notable sights along the trail of EVA 2 during the Apollo 17 expedition in Taurus Littrow Valley, including the brighter Tortilla Flats material later confirmed most likely to have originated in a landslide caused by the "mass-wasting" plasma shock wave that tore across the region during the Tycho Event. As now seems inevitable with space exploration, an equal number of important questions were raised by other evidence found while looking for this confirmation. Orange debris excavated from deeper under the surface by the Shorty impact, for example. Put together with other leads, the sharp eye of a single geologist on the ground saw and sampled something previously unrecognizable and invisible from orbit, and sharpened understanding of the Moon, and thus the Solar System and Earth in the bargain.
View Image & Learn more about Tycho Crater (and see it in visible images from the Lunar Reconnaissance Orbiter Camera).
Posted by Joel Raupe at 8:41 PM