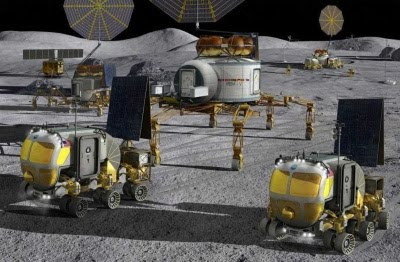 Figure 1 from "The Habitat Demonstration Unit Project Overview," Illustration of the latest Constellation Lunar Scenario 12.1 "Excursion Configuration." The Pressurized Excursion Module (PEM) depicted at the center will be represented by the "HDU" and tested this summer as part of the 2010 Desert Research and Technologies Simulations ("Desert Rats") test objectives [NASA].

A technique being utilized in NASA's lunar architecture analysis is analog testing of the lunar environment in desert locales. Running through potential "day in the life" scenarios at a lunar outpost with prototype equipment allows designers insight into the utilization of the proposed systems and refines architecture and operations concepts. A series of Desert Research and Technology Studies (Desert-RATS) have been held in locations such as Moses Lake, Washington and Black Point Lava Flow, Arizona, where the most recent test in September 2009 was performed with a Lunar Electric Rover, and a fourteen day excursion was practiced. The 2010 session of Desert-RaTS is planned for Black Point Lava Flow where two LERs will operate together and add a full scale lunar habitat prototype, the Habitat Demonstration Unit to the two LERs to allow for a 14-28 day mission.