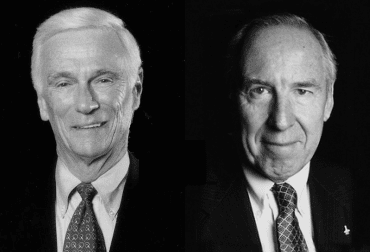 Gene Cernan (Apollo 10 & Apollo 17) and Jim Lovell (Apollo 8 & Apollo 13); the veteran Gemini and Apollo astronauts decried the proposed cancellation of the Constellation program in widely circulated news reports, last week.
Gene Cernan and Jim Lovell created more buzz about the Moon this past week than the latest rumor about the next release in the 'Twilight' saga. Their dire warnings to the Royal Society in London concerning the president's proposed cancellation of NASA's Constellation program continues to be picked up by every news organ on the planet. It's a testimony to the respect, even reverence, still held for the only men to travel to the vicinity of the Moon twice during the Apollo era (1968-1972).

As lunar module pilot on Apollo 10, a dress rehearsal two months before Apollo 11, Cernan traveled to within 15 kilometers of the Sea of Tranquility and four years officially spent more time on the lunar surface than any single individual, becoming the last man to walk on the Moon in command of Apollo 17 in 1972.

Similarly situated in the second seat of Apollo 8, traveling with Frank Borman and Bill Anders, dazzled the world in December 1968 when they became the first humans to travel beyond Earth orbit, circling the Moon ten times before returning to Earth in December 1968.

Lovell's dream of walking on the Moon, in command of Apollo 13, was dashed forty years ago next month when a service module tank explosion collapsed the command module's life support system. Fortunately, an ingenious and unplanned use of the resources of the Apollo 13 lunar module's engine and life support system returned the crew back to Earth.

Yet another generation was afforded the hair-raising experience of the near-disaster of the aborted Apollo 13 Moon landing and its single swing behind the Moon when the motion picture "Apollo 13" (starring Tom Hanks as Lovell) premiered in June 1995.

Though it was already a more obscure but oft-repeated phrase, Lovell's initial report of the on-board explosion has never been a more popular part of our heritage of language.

"Houston, we have a problem"is now firmly situated as the absolute model for a no-frills, understated report of disaster. Perhaps this is the reason why when Lovell called something 'catastrophic,' last week in London it drew attention, and even a second glance; something rare in a world even more filled with noise than during the tumultuous Apollo era.

Mark Whittington of Associated Content followed-up on the original BBC interview, attendant to Lovell and Cernan (together with Dr. Armstrong) and their private meeting with the Royal Society.

"Personally, I think it will have catastrophic consequences in our ability to explore space and the spin-offs we get from space technology," Lovell said. "They haven't thought through the consequences."

Eugene Cernan, part of the 1972 Apollo 17 mission, said the U.S. has a responsibility to lead the world in space exploration and technology and that he hopes people will be back on the moon "sooner than later."

"I'm quite disappointed that I'm still the last man on the moon. I thought we'd have gone back long before now," Cernan said. "But I am absolutely committed to the fact that we will go back at some time.""I think America has a responsibility to maintain its leadership in technology and its moral leadership... to seek knowledge. Curiosity's the essence of human existence."

President Obama's decision to cancel the Constellation return to the Moon program has run into a firestorm of criticism which seems to have caught the Administration by surprise. President Obama has scheduled a "Space Summit" in Florida next month to try to explain his reasons for canceling Constellation.

The problem is that not only have the Apollo missions to the Moon become part of the American story, a source of pride and proof of American exceptionalism, the fact that Americans have not been back to the Moon in almost forty years has become a silent source of shame.

Though any cancellation of the Constellation program is often reported as a done-deal, NASA and American space policy are officially unchanged, and work continues, even on the Ares 1. NASA is a "creature of Congress," and President Obama's "decision' to permanently postpone travel to the lunar surface awaits a change approved or rejected by Congress.

Though Constellation was originally a pay-as-you-go proposition, as a part of the Vision for Space Exploration set out by President George W. Bush in 2004, the proposed elimination of Constellation immediately polarized an Internet-active "space community," along with interests in regions and industrial sectors.
Posted by Joel Raupe at 7:55 AM