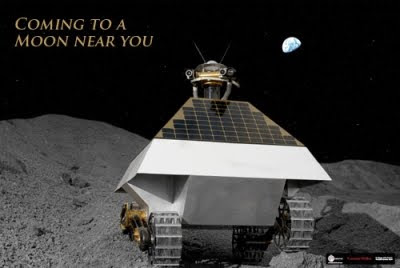 Astrobotic Technology has carry 109 kilograms-capacity for sale as part of a payload the company is preparing to fly on a maiden voyage to the lunar surface in a 2012 bid to win the Google Lunar X Prize.

"Science instruments, prototype exploration devices and commercial packages will be carried at $700,000 per pound, plus a $250,000 fee per payload to cover engineering" costs of integrating the package with either the expedition’s solar-powered surface rover or landing bus.

"The company posted a technical description of the service on its Web site, along with a “Request for Information” asking potential users to characterize how they would use this capability," according to Astrobiotic's David Gump

"Celestis Incorporated has already reserved 11 of the 240 pounds on the initial Moon mission," Gump wrote. "Houston-based Celestis operates a space burial service for cremated remains, with eight missions thus far to the Moon, Earth orbit or a suborbital trajectory.

Read the Story HERE.
Posted by Joel Raupe at 8:02 PM