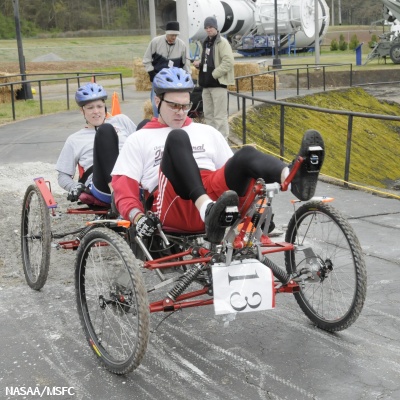 A team from Ohio State University competes at NASA's 16th annual Great Moonbuggy Race. This year's race is shaping up to be one of the best ever! Approximately 75 high school and college teams from around the world are competing in Huntsville, Ala., on April 9-10. It's an off-world racing event like no other! Check back at the NASA Moonbuggy site for the latest news and photos. NASA hosts the 2009 competition photo gallery here. [NASA/MSFC].

The 17th Annual Great Moonbuggy Race will be held April 9-10, 2010 in Huntsville, Alabama, at the U.S. Space & Rocket Center. Student teams are required to design vehicles around a gauntlet of engineering challenges similar to problems faced by the original Apollo moon rover team.

Each Moonbuggy is human powered and carries two students, one female and one male, over a half-mile simulated lunar terrain, including "craters," rocks, "lava" ridges, inclines and "lunar" regolith.

Vehicles are expected to be of "proof-of-concept" engineering test models rather than final production models. Each student team of six members is responsible for building their own buggy, and drivers chosen from each team must also be among the vehicle's builders.

As a part of the competition, and prior to course testing, the disassembled Moonbuggy entries must be carried to the starting line with components contained within a volume of 4' x 4' x 4' - constraints similar to those faced by the original Lunar Roving Vehicle. At the starting line, the entries will be assembled and readied for course testing and evaluated for safety. Assembly occurs one time prior to the first course run.

The top three winning teams in one high school and one college division will be those consuming the shortest total time assembling their vehicles and traversing the course. Each team is permitted two runs of the course, and the shortest course time will be added to the assembly time for the final event total.

Some 1,088 high school, college and university students from 20 states and Puerto Rico, Canada, Germany, Bangladesh, Serbia, India and Romania are enrolled to participate in the race this year.

Students start preparing for the race during the fall semester. They must design, build and test a sturdy, collapsible, lightweight vehicle that addresses engineering problems like those overcome by the original Apollo-era lunar rover development team at Marshall Space Flight Center in Huntsville for the Apollo science "J" missions, beginning with Apollo 15 in 1971.

Top prizes are awarded to the three teams in both the high school and college/university divisions that post the fastest race times, which include assembly and penalty times. A variety of other prizes are given by race corporate sponsors. These include “rookie of the year” and the “featherweight” award, presented to the team with the lightest, fastest buggy.

“NASA is committed to inspiring young people in science, technology, engineering and math, and the Great Moonbuggy Race is an excellent way for us to reach out to young people and get them excited and involved in technical opportunities available to them,” said Mike Selby, an avionics technical assistant in the Marshall Space Flight Center’s Engineering Directorate.

While completing his engineering degree at the University of Alabama in Huntsville, Selby was a member of the school’s moonbuggy teams, helping them to a second-place finish in 1995 and first place in 1996. Since 2001, he has served each year as a volunteer scorekeeper.

The race is hosted by the U.S. Space and Rocket Center and is sponsored by Lockheed Martin Corporation, The Boeing Company, Northrop Grumman Corporation, and Jacobs Engineering ESTS Group.
Posted by Joel Raupe at 12:24 AM

You've got the wrong date for the Moon Buggy race in the first paragraph; it is correct in the second paragraph (9th-10th of April 2010).

Thanks for correcting out erroneous slug line. We've fixed it.