Long-term degradation of optics on the moon 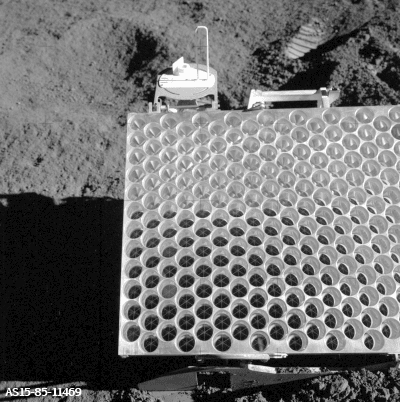 According to the Apollo 15 Surface Journal Comdr. Dave Scott observed that the LRRR looked "super clean" when he and Jim Erwin deployed the mission surface experiments July 31, 1971. He took the cross-Sun view of the LRRR above from the south, showing the orientation gnomon and bubble level. Four times the size of the retro-reflectors deployed by Apollo 11 and Apollo 14, the third and final U.S. LRRR deployed by Apollo 15 is the unit most often detected from Earth. Though lasers and photon detectors have improved many times over in the past four decades, and though First Look at the Apollo landing sites by the Lunar Reconnaissance Orbiter Camera (LROC) last summer showed equipment and astronaut footprints undisturbed, something has been steadily degrading the amount of light these important mirrors are returning back to Earth.

Abstract: Forty years ago, Apollo astronauts placed the first of several retroreflector arrays on the lunar surface. Their continued usefulness for laser-ranging might suggest that the lunar environment does not damage optical devices. However, new laser ranging data reveal that the efficiency of the three Apollo reflector arrays is now diminished by a factor of ten at all lunar phases and by an additional factor of ten when the lunar phase is near full moon. These deficits did not exist in the earliest years of lunar ranging, indicating that the lunar environment damages optical equipment on the timescale of decades. Dust or abrasion on the front faces of the corner-cube prisms may be responsible, reducing their reflectivity and degrading their thermal performance when exposed to face-on sunlight at full moon. These mechanisms can be tested using laboratory simulations and must be understood before designing equipment destined for the moon.

Long-term NASA plans (NASA Strategic Plan 2006) for placing scientific equipment on the moon face uncertainty regarding the environmental impact on such devices as hard information about the lunar environmental effect on scientific instruments has not been available. From a quantitative analysis of the performance of the laser reflectors, we find clear evidence for degradation of the retroreflectors, and note that degradation began within one decade of placement on the lunar surface. 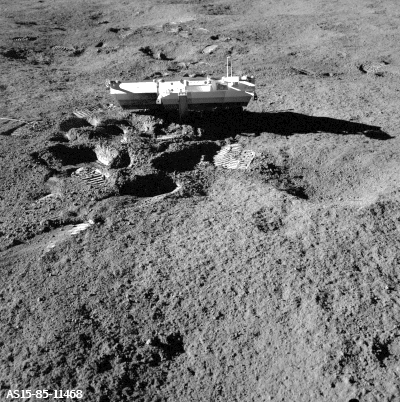 Some lunar laser retro-reflector arrays are brighter than others, though all their detections on Earth are measured in photons counts. Pencil-thin laser beams leave Earth and widen by more than a kilometer by their arrival on the Moon. The smallest part of these wavefronts are gathered up and reflected back, making a second traverse of the Earth-Moon distance and through Earth's absorbing and refractive atmosphere. [AS15-95-11468 & AS15-85-11469].

Starting around 1985, the McDonald operation moved away from the competitively-scheduled MST to a dedicated 0.76 m telescope designed to perform both satellite and lunar laser ranging, becoming the McDonald Laser Ranging System. In 1984 other LLR operations began at the Observatoire de la Cˆote d’Azur in France and at the Haleakala site in Hawaii, that used 1.5 m and 1.74 m telescopes, respectively. These systems all operate Nd:YAG lasers at 532 nm.

Primarily geared toward improving tests of gravity, APOLLO is designed to reach a range precision of one millimeter via a substantial increase in the rate of return photons. The large telescope aperture and good image quality at the site, when coupled with a 4x4 single-photon detector array, produces return photon rates from all three Apollo reflectors that are about 70 times higher than the best rates experienced by the previous LLR record-holder (OCA). Consequently, APOLLO is able to obtain ranges through the full moon phase for the first time since MST LLR measurements ceased around 1985.

We find that the performance of the reflectors themselves degrades during the period surrounding full moon. In this paper we describe the full-moon deficit, report its statistical significance, and eliminate the possibility that it results from reduced system sensitivity at full moon. We show that this deficit began in the 1970’s, and examine the significance of successful total-eclipse observations by OCA and MLRS. We see an additional factor-of-ten signal deficit that applies at all lunar phases, but this observation requires a detailed technical evaluation of the link, and is deferred to a later publication. 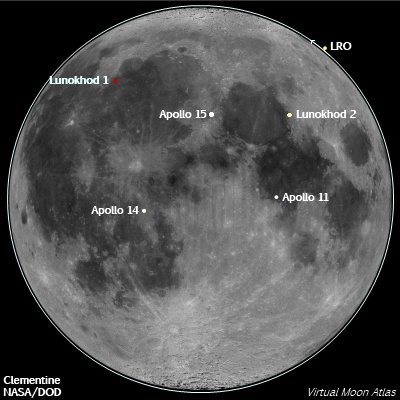 Laser Range Retro-Reflector (LRRR) arrays at the Moon. Apollo 11 (1969) & Apollo 14 (1971) are nearer the Moon's equator (and 40 degrees apart) and each is a quarter the size of the unit deployed Scott and Irwin of Apollo 15 (1971). Undetected since it was parked in 1970 are the french-built triangular prisms affixed to the Soviet rover Lunokhod 1 (1970). A similar design on the Lunokhod 2 rover (1973) has thermal drawbacks, alternately both hindering and aiding a rare detection. More recently, Goddard Space Flight Center keeps track of LRO (2009) and the Moon using laser ranging from a telescope in Maryland (See "Laser ranging and LRO," August 12, 2009).
Posted by Joel Raupe at 9:43 PM