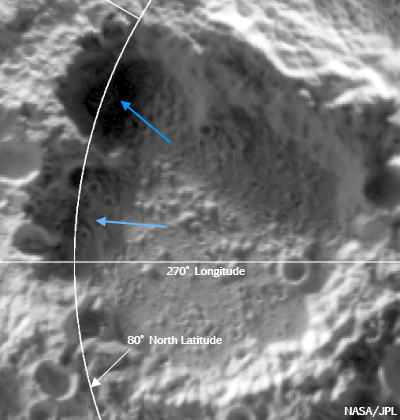 Twenty kilometer Hermite crater straddles the border separating the Moon's near and far side. The permanently shadowed southern interior lobes of the crater (blue arrows) host the Moon's coldest known temperatures, and at 25° K, it is "cold" as cold as any place known to exist in the solar system. From high-resolution temperature maps of the Moon's polar regions produced from data collected during the commissioning phase of the Diviner experiment on-board NASA's Lunar Reconnaissance Orbiter [NASA/JPL].

Almost five decades ago Watson, et al, (1961) speculated that molecules of volatile species might accumulate within the cryogenic environments of permanently shadowed polar craters. The subject was largely a scientific curiosity until recently. In the mid-1980's, people began to seriously discuss the feasibility of long-term or permanent human settlement of the Moon. Given that the Moon was known be missing the compounds need to support life and that importing volatiles from Earth is prohibitively expensive, lunar colonists were pictured as processing the putative polar volatiles. A bistatic radar experiment performed with the Clementine spacecraft was interpreted to suggest the presence of large quantities of ice at some polar locations.

The neutron spectrometer aboard the Lunar Prospector (1998) spacecraft reported high concentrations of hydrogen in the polar regolith, and some interpretations of the data set pointed to very high concentrations in permanently shadowed craters. The reformulation of civilian space policy in 2004, known as the Vision for Space Exploration, emphasized lunar exploration with eye toward development of economic returns from cislunar space and long-tern human presence on the Moon. The theme of finding lunar resources was an impetus for the inclusion of the Diviner Lunar Radiometer Experiment on the Lunar Reconnaissance Orbiter.

Preliminary results from Diviner report an unexpectedly low temperature down to 35K in the depths of some craters.